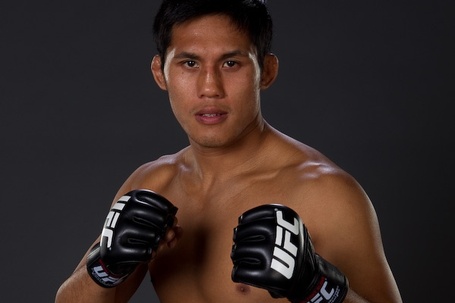 Deuce02 - Can you please give us an idea of what it was like in the TUF house, schedule-wise? How often did you spend in the gym? How often sitting in the house counting carpet fibers?

Nam Phan: We would have two training sessions a day, one in the morning, and then one at night time. This was our schedule 7 days a week for six weeks. Each training session would be about two hours.


RearNakedPoke - How influential is the assignment of contestants to teams in your opinion, given your recent experience. Did you feel at a serious disadvantage that you were not given the same exposure as team St. Pierre? Or is the timeline so short that the improvements to be made are negligible?

Nam Phan: Within the six weeks of training you cannot really pick up too much, but you try to take in what you can. For me I really didn't care what team picked me. i was going to depend on myself and not any of the coaches to get me where I wanted to be. The coaches are there to help, but it's your job to win these fights.

IrishKev - Do you feel that the popularity coming from the TUF house, on top of your experience in WEC, SF, Sengoku (etc.), could propel you to a title shot quicker than others? How many fights do you feel you are from a shot, considering the controversial loss?

Nam Phan: I think my experience in all the other promotions is irrelevant to how speedy I will get my chance at the title. I just feel that I’m like any of the other fighters and have to start my way at the bottom. Whether I get a title shot is not up to me.

Neil - Often times fighters will take the TUF route to get into the UFC, like you signing on for a lightweight season despite normally fighting at featherweight. Did you feel like you could compete in the UFC at lightweight, or did you have expectations that they would fold featherweight in to their ranks? Did you feel that shifting from the UFC to the WEC would have been an option, had neither of those scenarios worked out for you?

THORAZINE - Other fighters in the house teased you, were you surprised by that? BNF adds - is that why you learned to fight because you were always picked on? DetroitDrew adds - Do you consider bullying a serious issue that you would like to combat ala Frank Shamrock, Bas, and Mayhem?

Nam Phan:#1:i was not surprised at the immaturity that was involved in the house. From watching past shows I was ready for anything, but no matter what happened I promised myself to not lose control of my emotions and to represent my community in a positive light. #2: As a kid growing up I was always into martial arts getting picked on as a kid had nothing to do with it.#3: yes I do believe that Bullying is a bit of an issue. I do my best to discipline the local kids around my area to be good kids. 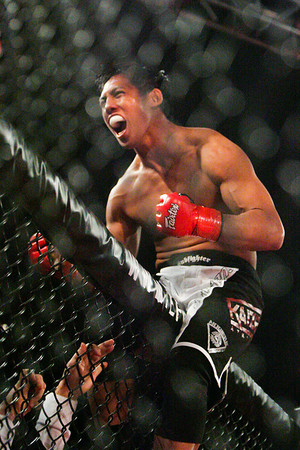 Bigger Zino - If you could choose between Josh Thomson, GZ Calvacante and Billy Evangelista, which would be your ideal rematch right now? If the UFC called tomorrow and said Chad Mendes is hurt – we want YOU to fight Omigawa, how excited would you be come Feb 5th 2011? vhw_ adds - Having faced Omigawa under Asian/Pride rules, do you think he’ll be successful in American soil?

Nam Phan:#1: I am not sure who would be the ideal rematch, they all have their strong points. #2: I would be very excited to fight Omigawa again. If the UFC called me to fight on feb 5th, I would have no problem with it. #3:LOL hummm..... We’ll have to see. For some ODD reason when Japanese fighters come fight in America they don't do too well. That's all I'm saying.

Dakatak - Having fought in multiple organizations, are you a fan of cross-promotional fights? Explain your reasoning. DetroitDrew adds - Would you like to see the UFC incorporate cross-promotion in any way or do you believe that when your the top promotion there is no way that cross-promotion can be beneficial?

Nam Phan: #1: I don't mind cross promotion. I think it gives fighters the opportunity to see who the best is. #2: Yeah you do have a point there. Even though we all may have questions about what if this fighter fought this person from that promotion? I do believe that the UFC is the highest level of competition when it comes to MMA and if anyone wants to prove they're the best, they need to compete in the UFC.

TheGreg - What are your thoughts on MMA judging? Lately there seem to have been more controversial decisions than ever before, do you think the scoring criteria needs to be changed or is the issue with the judges themselves?

Nam Phan: I believe that the criteria for the scoring system is fine. I have no problem with that. I think the problem is in the individual, not being educated enough in the combative arts.

THORAZINE - Where do you train for your Fights? Who trains you?

Nam Phan: I train year round. Fighting is a life style not a hobby. It is not something you do when you're only getting ready for a fight. You have to live, eat, and sleep fighting. To get ready for my fights I train with my students and I go to the local boxing gym in Anaheim.

Jay - I noticed that a lot of your recent fights seem to be "stand and bang" affairs. Do you intend to use your black belts in karate and BJJ, or is there pressure to be exciting to the fans until they know who you are? Also, does it bother you that you’ve been fighting all this time and most people only know you because of a reality show?

Nam Phan: #1: I am very passionate about jiu jitsu. I would like to finish all my fights by submission. Unfortunately I try to take the win in any form I can. The way I fight is considered to be exciting because that is my style but there is no pressure from the fans to make me fight this way. #2: I don't mind that people only know me from the show. It's just the nature of it.

Tuff.Gong - Who do you look up to or feel is the best fighter technique wise right now? Bigger Zino adds - Who do you give props to for your awesome hooks to the body?

Nam Phan: Jiu Jitsu wise I really like Damian Maia's technique. #2: I give all my boxing credit to my boxing coach Art James; he is the man behind the magic.

Bigger Zino - With regard to your MMA Academy, is life different since TUF or even now being on the active UFC 145 roster? Do you spend the same or less time growing your business?

Nam Phan: yes being of the show and a current UFC fighter has definitely helped my business grow. I spend about the same time helping my academy grow even since before the show, actually maybe just a little bit more lol.

Tuff.Gong - How do you feel the traditional Vietnamese Art of Quyen Dao compares to Karate or Muay Thai in respect- to it’s usefulness in MMA?

Nam Phan: Quyen Dao is pretty much karate. My master was a Vietnamese guy that just had a Japanese Sensei teach him Karate and he just renamed it Quyen Dao to market to the Vietnamese Community. I never got the chance to use Karate too often in my fights until I fought Leonard Garcia and caught him with the nice side kick.

vhw_ - Do you take pride in being of Vietnamese decent and do you feel like you need to represent that country? Has the UFC ever approached you about being an instrumental part in the Asian expansion of the UFC? Do you think you’ll be carrying the weight of your nation’s hopes for a fw/lw title?

Nam Phan: I am very proud of my heritage but I do not represent Vietnam because I am American but that doesn't mean I forget my roots and where we came from. #2: The UFC has never asked me to be an instrument in the expansion to Asia. #3: yes I do feel the weight of my people every time I fight, but that is a choice that I put on myself. 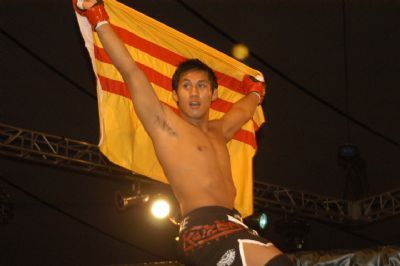 DetroitDrew - Who is a fighter you train with that we should look out for, someone you feel will be a future star of the sport that is just getting started?

Nam Phan: Watch out for Kenny " The Spaceman" Quach from the Ma Du Academy

ViolentMike - Do you really have groupies called "Phan's Fans"?

Nam Phan: I don't think I have any groupies, just some people that are very supportive of me. I am very thankful for.