Share All sharing options for: Frank Millsap is Proving Old Guys Can Fight

On the weekends most guys at 39 are waxing their cars and watching football, not getting into a steel cage and fighting another man. Frank Millsap (6-3) is not your average 39 year old. Millsap has been in the fight game for over 16 years. He will bring all that experience into the cage this Saturday night in East Ridge, TN. Frank will be facing an undefeated opponent in Shawn Hankins (3-0). Millsap's last 3 fights have been truly impressive to watch. "Promoters don't know what do think of a 39 year old guy busting heads" Millsap says confidently.

The first of the three fights was against current TUF contestant and current teammate of Millsap Ran Weathers. "A lot of people say that was a boring fight, but I won. I got the TKO over Matt Covan, that was nice. Then I got the KO over Keith Richardson. A lotta people were high on Keith and people were saying that I wasn't going to win."  Millsap has certainly hit his prime at 39. He has beaten some of the toughest competition of his career.

I asked Millsap what it was like fighting these young guys. "I love it! Because what they have in energy and youth, I've been through these fights. I don't get nervous. They don't what to think of me. When they're in the cage with me the fight is already over. When they see my fist coming at them it's too late." Millsap's last win only took 90 seconds. Richardson was 13 years younger than Millsap.

I am guessing just about everyone reading this has never knocked anybody out before. I asked Frank what it was like. "It was the softest feeling I have ever felt striking anything. It's like hitting a golf ball, you hit that perfect swing and perfect contact on the ball. There is no feeling, zero. There was no sting on the end of my punch, one shot and he collapsed. I hit him with all 155 pound of me. When I punched him I felt nothing. I was like Damn! Ok, that's a knockout.

Millsap talks about hitting his stride at 39. "I don't think I've hit my peak yet. I am getting better that's for sure. My last fight has proved that. Nobody has seen the best Frank Millsap yet. We are still debating on whether 155 is the right weight for me. We are thinking about taking a catch-weight bout and if all goes well making a permanent move to 145. Lightweight is not a hard cut. I cut 10 pounds in 3 hours, so I really don't think people have seen what I can really do yet.

For Millsap this is one of his biggest fights of his career. If he beats Shawn Hankins tonight, more than likely he will be fighting guys in the Northeast. If Millsap does win, he will escape the local Southeast scene and move onto bigger paydays and bigger fights. It won't be easy though Hankins is a young six foot athlete that hasn't been out of the fist round in his entire career. "I just got to weather the storm." says Millsap. "I know I can beat him. I have put the work in and I am ready to take what he gives me." 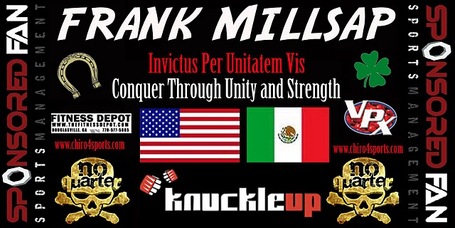