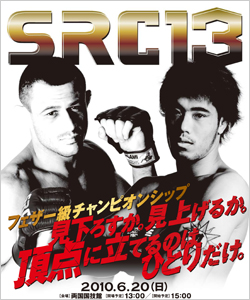 A card that is being unfairly overlooked this weekend, SRC 13 is bringing MMA fans possibly the best two featherweight match-ups this weekend. SRC 13 will be live Sunday morning at Ryogoku Kokugikan in Tokyo, Japan. HD Net has decided not to broadcast the event live, SRC will be aired sometime next week. SRC13 is very top heavy in terms of talent on the card. It has a great and meaningful championship featherweight fight between the challenger Marlon Sandro and the champion Masanori Kanehara. The co-main event of the evening is another great featherweight fight between Rodrigo Damm and Maximo Blanco. Also there are two tune up fights for bright prospects Shigeki Osawa and Ikuo Usuda.

I do believe Sengoku is being sponsored for this event, but I am not sure by who. It will be interesting to see how long Sengoku can stay afloat with this sponsor. This is a relatively inexpensive card for Sengoku to run and if they keep this business model up and still secure sponsors I see no reason why they cannot be relatively successful. I am very excited for the co-main and main events. I would really enjoy seeing Sandro to defeat Kanehara, but for some reason Kanehara has gotten some really weird decisions to go his way.

Like I said really great fight, I am very much looking forward to it. Kanehara has gone on a really weird streak his last 4 fights. Arguable lost to Chang Sung Jung (AKA the Korean Zombie) in the Sengoku featherweight tournament semi-final. Got beat up by Hatsu Hoki, but because Hoki was injured in the fight so Kanehara advanced even though Chang Sung Jung defeated Matt Jaggers in the Alternative bout! In the championship fight against Michihiro Omigawa he again arguably lost. Finally at Dynamite: Power of Courage Kanehara shocked a lot of people and soundly defeated "Kid" Yamamoto. Kanehara dropped Kid in the second round and overall busted him up on the feet.

Sandro who in that same featherweight tournoment was screwed out of a win and a chance to fight Kanehara in the finals by Omigawa. Came back in his next fight and just about killed  Yuji Hoshino and annihilated Tomonari Kanomata in 9 seconds. I favor Sandro a alot in this fight. He is a guy that has good gameplans, knows what he opponents are good at and quickly finds their weakness. Kanehara will have a hard time taking Sandro down and I doubt he will. Even though Kanehara has good footwork it is just a matter of time till Sandro lands one of his powerful punches and knocks out Kanehara. I doubt that will happen though. I see Sandro getting takedowns at will and putting Kanehara on his back as often as possible.

Absolutely a terrific fight! I have been very high on Damn the past 3 years. His stock fell a great deal when going on a two fight skid to Mitsuoka and Melendez. Damn is coming off a unanimous decision win agaisnt good Brazilian prostpect Ivan Pitbull. Pound for pound it would be very, very difficult to find a more exciting fighter than Maximo Blanco. The dude is straight up crazy. Pound for pound one of the best soccer kicker's ever. Blanco is just a wild man in the ring. If you are a fan of one on one violence Blanco brings it. Damn can't takedown Blanco, he (Blanco) is the  2007 Pan American bronze medalist in freestyle wrestling. Damn got beat up by Melendez on the feet and while Melendez is more technical than Blanco, he (Blanco) just has some unreal power and unpredictable strikes. Damn's only hope is to go for a crazy submission. I don't think it Damn will catch him with anything, so I like Maxi big in this fight.

This is the opening fight of Sengoku's four man Welterweight tournament. Whoever wins this fight in my opinion is going to win the tournament. After having an unsuccessful run in the UFC K-Taro hasn't really fought much. I know that in preparation for this fight it seemed that he is very motivated in competing. Omar de la Cruz really impressed me with the run he made in the Bellator tournament last year. He has a really good jiu-Jitsu game and he is nicely developing a wrestling and striking game. I really like Cruz as a prospect, he may not be an A level fighter, but to me it is really fun to watch fighters grow and compete. I favor K-Taro in the fight. He has the better striking game and has more ring experience, although Cruz does have more space to work his Jiu-Jitsu game. Really closely match fight. I want to pick Curz, but I am pretty sure K-Taro can stay on his feet and bust up Cruz.

A really well matched fight by Sengoku. Osawa is a really bright prospect that was maybe thrown to the wolves a little early. Good to Sengoku give him a winnable fight that will give him time to work on his MMA game. Toida is just a really tough guy. He has fought the best featherweight's in Japan and not many have finished him. Toida has a really crappy wrestling game, but makes up for it by having a really good grappling prowess. Osawa will have to be careful if he decides to take Toida down. All and all I think standing or on the ground Osawa is just to good for Toida.

Usuda is a good wrestler with above average striking ability. He has been pegged as one of the guys at Lightweight to be the new stars of Japan. I am excited the see this fight, not because I think it is going to be a good exciting fight more because I want to see how Usuda approaches this fight. Kang is just a really young tough fighter with very limited skills. Like I said really excited about what stragey Usuda uses to finish this fight.

And that is all the meanful bouts on Sengoku Radien Championship 13. I would recommend any of not to watch the trash on the undercard. I doubt it will be very pleasing to the eye. If you do care about fighters such as Sanae Kikuta, or Ryo Kawamura Leland Roling has a great preview up at Bloodyelbow.com. Should be exciting fights no the less and I look forward to watching the fights I have listed.