Share All sharing options for: Ben Askren Sets the Standard for Wrestling in MMA at Bellator 22 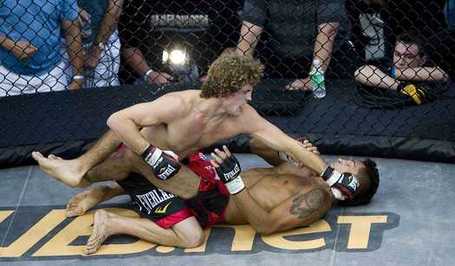 Last night’s final in the Bellator Season 2 Welterweight Tournament saw former Olympic wrestler Ben Askren dominate the experienced and highly dangerous Dan Hornbuckle. It was a fight dictated entirely by Askren’s wrestling pedigree, a fight in which Hornbuckle could barely breathe let alone sustain any form of offense. And yet, as one-sided as it was, it was just as breathlessly exciting.

So often has the MMA fanbase decried the modern wrestler for performances characterized as boring and anti-climactic. A litany of examples has come at the highest levels in 2010: Georges St. Pierre vs Dan Hardy; King Mo vs. Gegard Mousasi; Rashad Evans vs. Quinton Jackson. Fans have begun to resent what they view as wrestlers content to use their primary skill to slow down fights, cruising to victory with a lack of aggression. But anyone tossing Ben Askren in that category simply doesn’t know good sport when he sees it.

Askren had no delusions about what would win him the fight and initiated that game plan immediately. Within the first minute of the first round he had Hornbuckle, a very dangerous striker, on his back and desperately hoping to keep the Olympian in closed guard. Hornbuckle, gifted with long legs and great presence off his back, wasn’t in unfamiliar waters; he just had no way of getting Askren off him and was rarely able to claim guard. Over a vast majority of the three rounds, Askren amazingly kept his torso to Hornbuckle’s as if attached by magnetism. Whenever Hornbuckle managed to create space Askren was on his back. At one point early in the fight, a standing Hornbuckle attempted to break free of Askren who proceeded to get a takedown while seated on the mat.

But the greatest aspect of Askren’s performance was his relentlessness. He constantly worked in and out of guard, battering Hornbuckle often enough to wear out a boxer’s arms. He’d briefly check for submissions, find nothing, and go back to ground-and-pound. And it was all done as Hornbuckle fired any submission he could find at Askren—repeated armbar attempts, an omoplata, and an all-but-locked-in triangle choke. In the middle of round three there was high drama when Hornbuckle grabbed a deep kimura underneath Askren, swept to side control, and damn near stole the victory. But Askren has rubber in his joints and wiggled out of danger, controlling Hornbuckle the rest of the round.

Askren put forth a barrage of offensive, aggressive wrestling that was a pleasure to watch. In the process, he became a star whose fights are now must-watch affairs. And it was all done without one serious attempt at striking. All the wrestlers of MMA currently struggling with fan perception should take note.