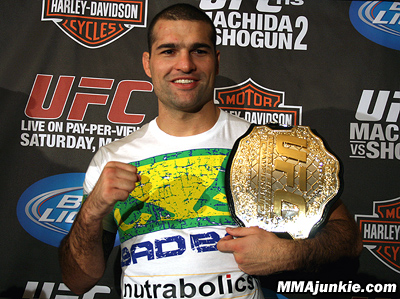 MMAJunkie.com has the scoop on the latest of Shogun's many knee operations:

With Rua's window of recovery, UFC president Dana White is unsure when the Brazilian champ will fight again.

"He just got out of the hospital; it was a successful surgery," White said. "He had the surgery in [Los Angeles], and he's going to be doing all his therapy in (Las) Vegas.

"So he'll be in Vegas for the next five weeks."

ESPN's Franklin McNeil reported Shogun had a knee injury prior to UFC 113, but White said Shogun sustained the injury during the fight.