Share All sharing options for: Jason Brilz steps in for Forrest Griffin against Lil' Nog at UFC 114 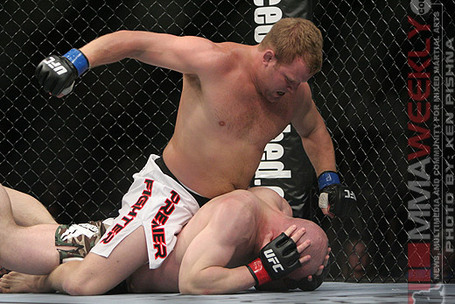 MMAjunkie has the details:

Mere hours after reports surfaced that the former light heavyweight champion had been forced out of his UFC 114 contest with Antonio Rogerio Nogueira (18-3 MMA, 1-0 UFC), MMAjunkie.com(www.mmajunkie.com) has learned that Jason Brilz (18-2-1 MMA, 3-1 UFC) has agreed to take the fight on a little less than four-weeks' notice.

A lot of clamour had been made for Jon Jones to step in here, but I'm glad they didn't try to book that fight for Jones' sake. Brilz is a solid fighter who beat Eric Schafer at UFC on Versus 1, and his only loss in the UFC came by way of a controversial split decision to Eliot Marshall at UFC 103. Still, he faces a big leap in talent and the toughest fight of his career against Noguiera.