The following was written by North Carolina lightweight Chris Smith as he did battle with North Carolina's D'Juan Owens at the Elite Championship Cage Fighting 12 event in Charlotte, NC last night.  The video of the fight can be found after the jump. 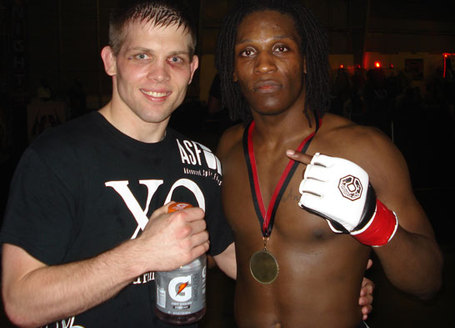 Never leave it in the judges' hands.  That is phrase that will best describe the fights last night.

First going back to the ending of the April 17 fight, I began a weight lifting regimen the day after the April fight.  Along with the weight lifting, I greatly increased my protein intake, which had the desired effect to make me much stronger, but it also has the undesired effect of causing my weight to balloon to 175lbs.  Two weeks out that is how much I weighed.  I knew it would be a hard weight cut, and despite my best efforts 1 week out I was still way over my normal target.  I sent in a request to have a catch weight at 160 but it was denied so cutting down to 155 I went.

Going into the fight, I knew from film my opponent was a very good stand up fighter.  Knowing this I thought it would be a great opportunity to test my stand up game.  I had been putting a heavy emphasis on my stand up game including leg kicks.  They were working very well for me in practice.

So going into the fight my game plan was to stand up with him the entire fight.  I was planning on throwing out leg kick after leg kick to eliminate his speed advantage.  I knew I could out wrestle him if I could take the fight to the ground, but I wanted to test my stand up against a good stand up fighter.

The match started off with something I had not seen in film.  D'Juan had some really effective leg kicks.  I knew he threw some straight kicks but I did not know how effective his side kicks were.  I started off the fight very timid and he took advantage of that fact and completely destroyed my front leg.  His other punches, aside from one very well placed shot to my eye, were blocked or not very effective.  He cleanly won the first round, but not in dominating fashion.

The second round was much like the first.  He continues to assault my front leg.  At one time he did cause my leg to give out, but was slow to jump and when he jumped I was able to spin him into the cage and press him up and attempt a take down.  He had good take down defense and was able to stuff my takedown.  The round ended with him sprawled on top of me.

When the third round began, we started circling.  Very early in the first round, I caught him with a jab that rocked him and knocked him down.  I was surprised the hit knocked him down so I hesitated to jump in on him.  When I did come in he dove and grabbed me around the waist I wrapped my hands around his waist and sent him flying over my head then spun around and took his back. I had trouble getting my hands free so it prevented me from securing many strikes.  I sunk a rear naked choke in, and thought it was about to be ended but D'Juan was able to twist his body to get a little space.  I reset my hands re flattened him out and tried again.  This time when I thought I was about to get it he was able to get a hand up again giving him the space needed to prevent a tap out.  I have to give great credit to D'Juan for fighting out of the submission attempts; many people would have tapped out.  The round ended with myself throwing everything I had left in ground and pound.  The attacks were not very effective but I was hoping they looked more devastating than they actually were causing the ref to stop the fight, but alas it went to score card.

My corner thought the match might have been given a draw with it being scored as a 10-9, 10-9, 8-10.  I do believe it was a close fight but if I was going to win I needed to finish the fight.  D'Juan Owens earned a solid unanimous decision.

Coming away from this fight I have learned a few things about myself.  1.  I can hang with the top stand up fighters, 2.  I need to be much more aggressive, 3.  I have some good power in my stand up if I just let myself go.

I really enjoyed this fight, D'Juan Ownens is a top class fighter, and I would be happy to fight with him again.  Next for me is to heal up, I will be fighting June 12, at Rock at the Dock in Mooresville, Vs. Shane Crenshaw.  Check out www.therockmma.com for details.