Share All sharing options for: DREAM.14 Full of Fun Matchups This Weekend 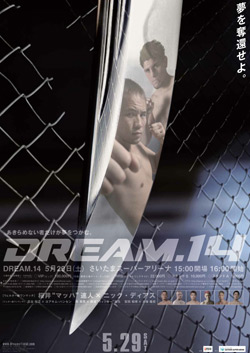 Perhaps lost in all the bluster of this weekend’s long anticipated showdown between Rashad Evans and Rampage Jackson is a very interesting card half a world away. DREAM.14, set to take place in the wee hours of Saturday morning, has plenty of compelling matchups to sate the appetites of insomniac fans. The latest card by PRIDE FC’s struggling successor is packed with the most popular fighters in Japanese MMA, even if their stars are fading.

The Gracie Hunter looks to add another notch on his wall as Kazushi Sakuraba takes on young Ralek Gracie. Sakuraba (26-11-1) has managed to stay competitive against lesser opposition in recent years despite the damage he’s accrued. Against Gracie (2-0), he likely won’t have to worry about being bludgeoned to near death and has plenty of tricks in his back to put the youngster away.

Japanese Super Hero Ikuhisha Minowa (45-30-8) is being fed another large, cumbersome opponent in Imani Lee (1-2). Minowaman, actually a titlist with his Super Hulk Grand Prix victory, should dispatch Lee with some dropkicks or something early on.

Fallen superstar Norifumi "KID" Yamamoto (17-3) looks to rebound from a dreadful 2009 with a fight against the little-known American Federico Lopez (4-2). If the once mighty KID can’t overcome Lopez, it’s safe to fully consider his career buried. I expect him to brutalize Lopez, but wouldn’t be surprised if Yamamoto found a way to lose.

And the main event features a very compelling matchup between Strikeforce Welterweight Champion Nick Diaz and former SHOOTO Middleweight Champ and PRIDE legend Hayato "Mach" Sakurai. Diaz (21-7) has been on fire lately and most recently eviscerated DREAM Welterweight Champ Marius Zaromskis in January. Sakurai (35-10-2) looked to have breathed new life into his career with his brutal 30-second stoppage of Shinya Aoki in last year’s DREAM WW Grand Prix, but fell to Zaromskis in the same tournament. He capped the year by ending up in an Akihiro Gono armbar on New Year’s Eve. Diaz has matured into a seasoned fighter and Mach might just be over the hill, so I look for Diaz to win via KO in what could be a very fun match.

It’s a fun card from top-to-bottom, so make sure to tune in Saturday at 3 AM on HDNet for all the action as The White Cage makes it’s second appearance in Japan’s top MMA promotion.