GSP to Have Grappling Match with Hockey Player

Share All sharing options for: GSP to Have Grappling Match with Hockey Player 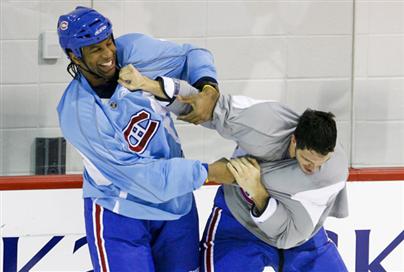 Yeah, this is actually happening:

TSN reports that Georges St-Pierre and former Montreal Canadiens forward Georges Laraque have agreed to a friendly grappling match at the Tristar gym in Montreal.

St-Pierre, currently without a scheduled bout, is walking around at 190 pounds. He'll give up a considerable size advantage as Laraque weighs closer to 270 pounds.

Laraque believes his weight advantage will offset St-Pierre's strength in wrestling. Despite no collegiate wrestling experience, St-Pierre is considered one of the best wrestlers in MMA and last year made news when he said he was considering a run for a spot in the 2012 Olympics.

"The problem is Georges believes I am like a tomato can you can grab at the supermarket and you can lift it and do what you want," St. Pierre said. "He's going to find out that it's not that easy.

Maybe this will be a good time to fix that kimura he couldn't lock up on Dan Hardy...