Could Genki Sudo Be Returning to MMA? (!)

Share All sharing options for: Could Genki Sudo Be Returning to MMA? (!) 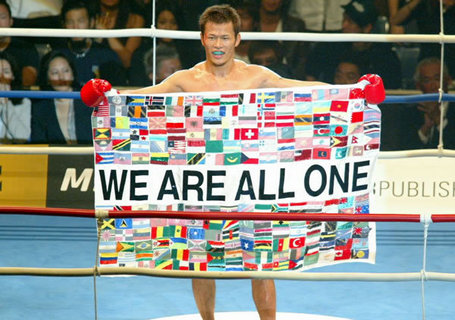 Zeus over at MiddleEasy thinks it's possible:

Earlier this month on his personal blog (or 'diary' as he likes to call it), Genki said that after three years of retirement, he finally received his Brazilian jiu-jitsu black belt at the Triforce academy under Watanabe Yoshinao. Genki Sudo and his instructor noted that it's somewhat of a paradox to achieve the height of your profession when you've retired from it. Watanabe asked if this meant he would return to the sport of mixed martial arts and Genki Sudo said he's thought about it, but abruptly (and sarcastically) says it's a joke. He then ends his diary entry with 'winking' emoticon.

Not only would this be undeniably epic, but it could also be the shot in the arm Japanese MMA has need for the past few years since PRIDE's collapse. Genki holds notable wins over Damacio Page, Mike Brown, Nate Marquardt, and, of course, Eric "Butterbean" Esch.