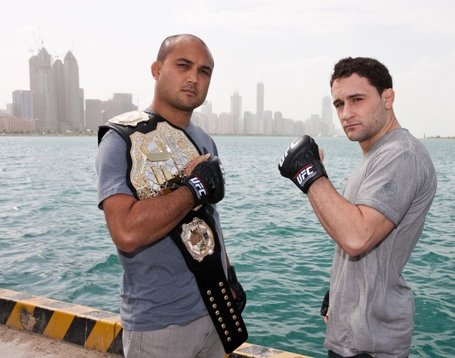 This Saturday finds the UFC’s first foray into the Middle East with UFC 112 from Abu Dhabi. It’s also the first event by the company to be held outdoors, which might be the most interesting thing about the card considering how uncompetitive the top-two fights on the bill seem to be.

The main event pits Frankie Edgar against BJ Penn for the latter’s lightweight championship. It’d be a severe understatement to call Edgar an underdog; whereas the other showcase match involving Anderson Silva and Demian Maia presents the challenger with at least one advantage in the fight, Edgar has no feasible means of victory here aside from the proverbial "lucky punch". The problem with that is Penn has an iron chin and if Georges St. Pierre, Takanori Gomi, Lyoto Machida, and Kenny Florian can’t knock him out, neither can Frankie.

Edgar’s only loss is to Gray Maynard and while Penn won’t dwarf Edgar, the challenger would be foolish to think he can win a wrestling match with Penn. Realistically, Edgar should hope the Hawaiian doesn’t want it on the ground where a hasty finish would occur. Frankie is quick and has nice boxing, so his best chance at survival is to stay light on his feet, shuffle in and out of the pocket and try to hit BJ at range, despite having a shorter reach. Penn has great boxing technique and slips most MMA fighters’ punches with ease, but he is somewhat flat-footed and might be susceptible to very brief, speedy exchanges.

What it boils down to is if Edgar can make it a 25-minute fight while winning a few exchanges. He might avoid damage early, but BJ Penn is so precise in his attack and effective in his defense that I don’t see Edgar doing much. He’s a tough guy, but just has nothing for the champ. I think he gets stunned at some point by Penn’s power, and then the best lightweight in history finishes it on the ground sometime around the third.