Vitor Belfort Says "He Is Back"

Share All sharing options for: Vitor Belfort Says "He Is Back" 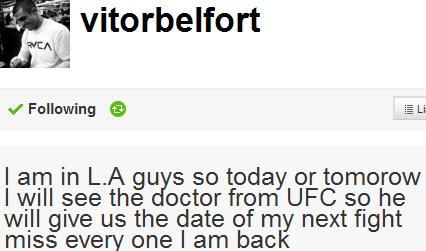 UFC middleweight Vitor Belfort tweeted this message on yesterday, so it's possible that he could find out when he'll fight again on today.  Belfort was originally supposed to be challenging Anderson Silva this weekend at UFC 112 for the middleweight title, but a shoulder injury that required surgery has taken him out of the game.  Now the question is, since he's missed some time due to injury, will the UFC grant him a shot at the winner of Silva/Maia?  Do you think he'll need to win a fight before being granted that title shot again?