Georgia Combat Expo/Klash of the Kings II Thoughts and Results

Share All sharing options for: Georgia Combat Expo/Klash of the Kings II Thoughts and Results

David Oblas and Undisputed Productions put together a fun filled day for everyone that stopped by the Renaissance Waverly Hotel. The Expo was smaller than most fans anticipated, but many seemed to enjoy themselves looking at the booths. If you got there early (12:00) Pedrosa was hosting a grappling tournament. I had never been to a live grappling tournament before, so it was really exciting for me to watch. After the grappling there was Amateur Boxing and Kickboxing. It was interesting to watch some of the kids Box. After the Boxing and Kickboxing it was four hours until Klash of the Kings II started so I checked out the booths. X3 and their chiropractor Jason Weeks was showing off some of his rehabilitation techniques he uses on patients. Gracie-Barra Jiu-Jitsu was doing some BJJ demonstrations. Ascension MMA was getting people to taste some bizarre purple looking concoction. It was a bit small, but still really cool and a great way to bring the Combat Sports community together. Klash of the Kings II thoughts and results after the jump.

Riviera was really peppering Burtner. Riviera was throwing combos with some pop and Burtner would try and counter, but was to slow for Riviera. Burtner was so tough, he walk through all of Riviera's shots and kept coming. Riviera got the fight to the ground and tried to finish the fight with a triangle, but the game Burtner popped out. Riviera gassed in the third and Burtner tried to take advantage, but Riviera was to quick and would move out of Burtner's range. I am really interested in Riviera now, kid looks sharp. I must say from a photography point of view it was a nightmare. Awful lighting in the Ballroom.

Watson came out and looked pissed off as he stepped into the ring. For some reason he seemed to leave the ring the same way. Anyways, this was a very exciting back and forth fight. Watson looked like the better man on the feet early landing a few jabs. Watson shakes off a takedown attempt and tries to lock in a guillotine. Guillotine doesn't work and Watson is on his back. Coldwell gets some offense going in the round and passes to side control landing some punches in the process. Coldwell gets mount and Watson quickly gives up his back. Watson launches out of Coldwell's back mount. Both fighters are standing and Coldwell quickly looks for a takedown. Coldwell achieves the takedown and the round ends. In round two Watson is ready for Coldwell's takedown attempts. Watson stuff the first one and Coldwell gets a jab in his face for the attempt. Coldwell shoots again and this time gets it. Coldwell tries to pass Watson's guard, but Watson is sneaky and uses Coldwell's momentum and sweeps him. Watson immediately goes for a Kimura, but changes his mind and finishes the fight with an armbar.

Graves wants this fight to hit the floor early and he archives this with a swift knee tap. Graves completely out-classes Wasley on the ground, getting to mount without a problem. Graves working submissions on Wasley, but Graves can't seem to lock in the arm triangle properly. Graves tries to open up Wasley with some ground and pound. Round ends with Graves in mount. In the second round it was more of the same, Graves gets a takedown and moves to mount. This time Graves locks in a Kimura that finishes the fight.

I have seen Alvarado fight twice before this fight, he is a fan favorite because he swings for the fences. I was having some fun talking with Billy Bratz, cool guy hope to see him back down here. Bratz comes out and has some serious length on Alvarado. Bratz uses his reach advantage by flicking a sharp jab at Alvarado. Bratz controls the round with his jab, avoiding Alvarado's home run right hand. In the second Alvarado starts to shorten his punches and they begin to land on Bratz's chin. Both fighters are going toe to toe and Bratz starches Alvarado with a beautifull straight right cross. Bratz swarms Alvarado and somehow Alvarado lands a right hand that puts Bratz off balance. referee gives a 8-count (even though these guys are advanced ammys and it is not allowed) to Bratz. Bratz comes back using his range to land multiple punches to end the round. Bratz looks timid to engage, Alvarado just keeps coming. Bratz is having difficulty finding his range with Alvarado using leg kicks. With little time left both fighters go toe to toe and start throwing bombs. Fight of the night, great effort by both fighters. Live I thought Bratz won the fight, to me he was the more effective fighter. Hope Alvarado recovers from the cut he sustained. 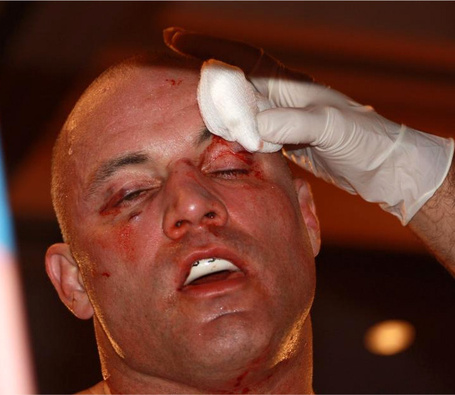 Mandio is a Judo Black belt with an 0-1 record. Kuhn was riding a 2 fight winning streak, hopefully down the road he can get a fight with Jeff Boudreaux. As soon as the bell sounds Kuhn charges Mandio and attacks him with a sharp combo. Mandio initiates the clinch and hits a hip toss. Kuhn pops out from under Mandio and gets back to his feet. Mandio again inishates the clinch. Mandio gets Kuhn down from the clinch. Kuhn quickly reverses and gets on top of Mandio to end the round. In round two Kuhn comes out a bit tentative and Mandio takes advantage by taking Kuhn down. Mandio isn't able to stay active while in guard and the fight is stood up. Mandio gets Kuhn turtled up and starts landing big strikes on Kuhn. Round ends, Kuhn's corner is telling him he needs to finish Mandio or he is going to lose the fight. Round three consisted most of clinching, Kuhn didn't want to open up because he didn't want to be taken down. 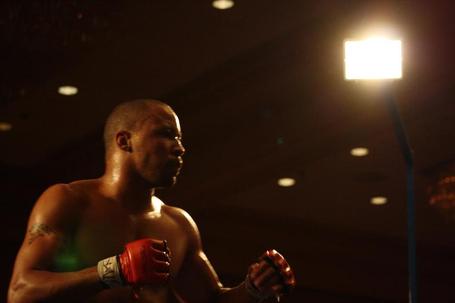 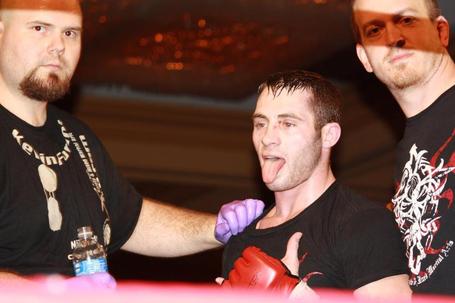 This was a very fast paced fight. Goldsby is throwing wild strikes, Quieroz avoids them and takes Goldsby down. Quieroz controls Goldsby, Quieroz is trying to get the crucifix position. Goldsby explodes out of side control and gets back to his feet. Goldsby is throwing wild kicks that leave him open to get taken down. Quieroz grabs one of Goldsby's legs and takes Goldsby down. Round ends with Quieroz in side control. More if the same in round two, Goldsby leaves himself open for the takedown and Quieroz takes advantage. Quieroz gets side control and works for a submission. Round ends with Quieroz landing strikes on Goldsby's mid-section. In the last round Goldsby comes out and nearly lands a jumping kick on Quieroz's face! Goldsby is not striking wildly this round, he seems to be wary of the takedown. Goldsby catches Quieroz with a strike and Goldsby pounces. Quieroz survives. Goldsby is on top landing a few strikes to Quieroz's chin. Round ends with Goldsby on top, really good main event. 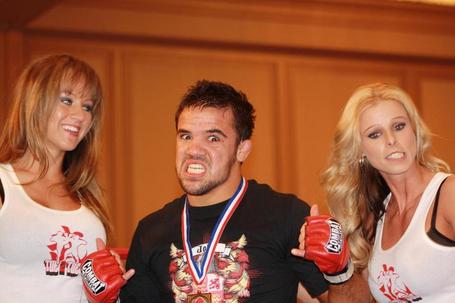 Really good event put on by Klash of the Kings, I didn't think they got there name out to the people enough. More promotion was going towards the Tex Johnson vs War Machine fight. I wonder what affiliation Andy Stroud has with Davaid Oblas? Anyways pretty good card, the main event was great and Quieroz should get a call up to the majors soon. It was a really cool experience and I enjoyed it. I just hope the next Expo is not at the Waverly again. I want to thank David Oblas and Andy Stroud for their hospitality.