Share All sharing options for: WEC 48 Preview: Benson Henderson and Donald Cerrone Rematch of 2009's Fight of the Year 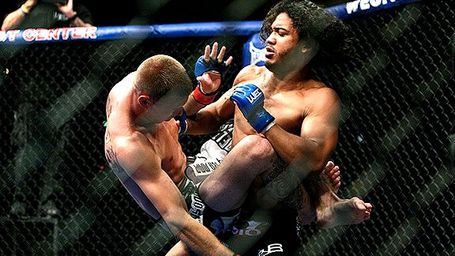 Sherdog named their last scrap at WEC 41 the best fight of last year, and this one should be good, too. Henderson, the WEC Lightweight champ, is a strong wrestler who's a little bigger and stronger than Cerrone, and for the first half of their last fight he was able to Cerrone on his back. Cerrone is very aggressive with submissions, however, being a long time Greg Jackson fighter.

You can be sure Cerrone knows Henderson's game plan involves a lot of work from a tall posture in his guard, if Henderson isn't outright standing up in his guard. "Cowboy"  frequently had the champ in deep trouble the last time they fought but never had a sub locked deep enough to get Henderson to tap. Cerrone has recognized Henderson's resiliency and has talked a lot about looking for the KO leading up to the match. His deep Muay Thai background can be useful here, but Cerrone's bread and butter is with submissions; 10 of his 11 victories have come by submission.

Henderson's game plan should be similar to the first time: get Cerrone down, posture up, and drop bombs. I don't see either fighter gaining a significant advantage to finish here, but Cerrone will come out with more fire early on and try to take an early round that lost him the last bout, which is why I have him taking this in very fun five-round war.