The Nexus of Two Fighters: Jose Aldo vs. Urijah Faber

Share All sharing options for: The Nexus of Two Fighters: Jose Aldo vs. Urijah Faber 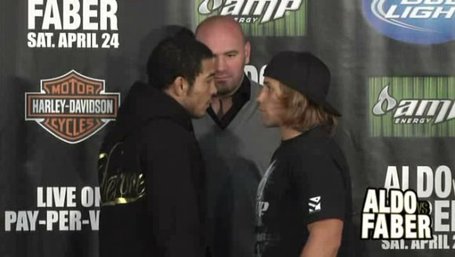 Saturday’s main event of WEC 48 features my personal favorite implication in a fight: the proverbial "passing of the torch". From 2006-2008, Faber was the poster boy of the WEC, in fact the promotion’s only star, and a fixture on many pound-for-pound lists. There was a time when the number two matchup on most fans’ wish list was Faber vs. KID Yammamoto, second only to Chuck Liddell vs. Wanderlei Silva. Faber was an entire promotion’s golden boy and might have even been able to headline his own UFC card.

Then, last year, he ran into his kryptonite in the form of Mike Thomas Brown. After dropping the title through a knockout and then failing to regain it in a courageous performance with two incapacitated hands, many thought Faber’s time at the top was done. At WEC 46, however, Faber showed the MMA world that he was far from finished with a dominant performance against highly ranked Raphael Assuncao, winning by rear naked choke against the ground specialist.

With that victory Faber landed in prime position to face the darling of the featherweight division—newly crowned king Jose Aldo. At just 23 years of age, the Nova Uniao product has stormed onto the scene with a succession of first round knockouts. Over just two rounds at WEC 44, he made then-champion Brown look second-class with a devastating knockout. Now, before he has defended his title even once, many fans are claiming that his speed and dynamic striking denote the second coming of Anderson Silva.

On Saturday, Aldo faces more than just one of the all-time great fighters; he faces the question of whether or not this is truly the beginning of a new era. Faber, though he's just 30, brings a world of experience into the fight and is one of the few opponents against whom Aldo wouldn't have any considerable speed advantage. Aldo is the favorite, yes, but Faber brings with him the added motivation of proving his time at the top is not yet done. A win for the Brazilian certifies that the Aldo era is upon us; a loss means the old guard has not yet passed. The stakes couldn't be any higher.