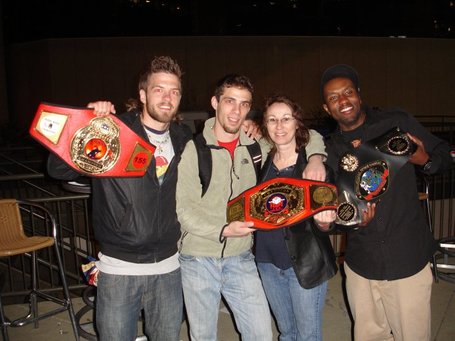 Due to the success of SportFightX's Middleweight tournament, William "SoCo" McAllister has decided to put together another exciting tournament for the fans in Atlanta. "SoCo" is looking for the best undiscovered talent in the Southeast region to fight in the tournament. All fighters looking to compete must have an undefeated amateur/pro record. The tournament starts June 5th and one of the participants announced is North Carolina's top prospect Jacob "Brick" Allman. Allman is 7-0 in his amateur career and is looking to win this tournament to ignite his pro career.

McAllister comments, "What we are looking to do with this tournament is build a relationship with fighters and the fans. We want the fans in Atlanta to know that SportFightX consistently signs the best talent in the Southeast region. The SportFightX 2010 155 Tournament will be exclusively held in Atlanta. The dates for the tournament are June 5th, September 18th, and the Finale will be sometime at the end of the year."  When I asked, what made you choose 155 for the tournament? SoCo responded."There are just so many good guys at this weight. When I started scouting fighters for the next tournament I wanted to do, 155'ers kept popping up. Our goal is to continue to build a relationship with our audience. We have a show once a month, every month until the end of the year. I think the fans are going to love the exciting shows we are going to put on."

Other rumored participants are:

Randy Pogue(1-0) Pogue is a 40 year old Kickboxer/Boxer. His last fight was a boxing match against K.J. Noons. Pogue lost a unanimous decision. Pogue trains at Unit 2 Fitness in Atlanta, where he instructs Kickboxing and Boxing classes. Here is a video of his only MMA fight.

Troy Dollar (5-0) fighting out of Mountain City, Tennessee. Dollar is a talented Kickboxer who has a purple belt in Brazilian Jiu-Jitsu.  Dollar has finished all his fights, and has never seen the third round in his amateur career. Below is his fight with Lee Burns.

Eric Kriegermeier (3-0) Kriegermeier is part owner of Ascension MMA, where many UFC and WEC fighters come to train. Kriegermeier, who is originally from Chicago surrounds himself with a great group of fighters that push each other. Kriegermeier is a solid grappler, who uses his Jiu-Jitsu to finish fights. In my opinion, Eric is one of the early favorites in this tournament. I couldn't find any video of him fighting so watch my interview I did with him last year.