So Is Frankie Edgar The #1 Lightweight In The World After Beating BJ Penn At UFC 112?

Share All sharing options for: So Is Frankie Edgar The #1 Lightweight In The World After Beating BJ Penn At UFC 112? 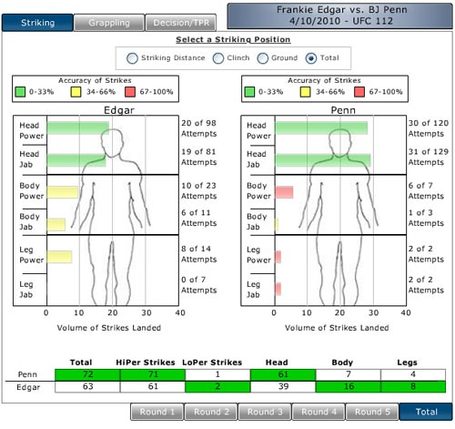 It's a legitimate question right, since Frankie Edgar won the fight at UFC 112? Above are the fightmetric statistics for the BJ Penn/Frankie Edgar scrap at UFC 112. Now, I will not dispute that it was a close fight as it most certainly was. However, watching the fight live I thought Penn landed more shots and landed more 'clean' shots as evident in the replays the UFC was showing in-between rounds. Also, the stats from fightmetric back up that stance as well.

Fightmetric scored the fight in favor of BJ Penn 49-47. Now, I caught some heat by ranking Shogun Rua in the #1 spot because I thought he beat Lyoto Machida at UFC 104. It's crazy how similar that fight and last night's fight between Penn and Edgar was. Prior to last night's performance, I had Edgar in the #7 slot as far as lightweight rankings go. I take nothing away from Edgar as he performed and executed a good gameplan. However, I don't know if I can rank Edgar in the #1 slot after that performance. Where would you rank him now?