The Crafting of a Reputation: Fedor and the GSP Conundrum

Share All sharing options for: The Crafting of a Reputation: Fedor and the GSP Conundrum 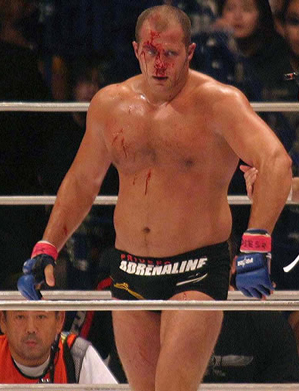 I’ve let the hullabaloo over George St. Pierre’s performance on Saturday night against Dan Hardy gestate for a few days, hoping to let some kind of consensus emerge and see what sort of climate he’s created for fans. Although not as volatile as it seemed to be immediately after UFC 111, fan opinion seems to have congealed into the judgment that although GSP completely outclassed and dominated Hardy, his lack of a finish against the outmatched Brit was lackluster and his position on the pound-for-pound totem pole is in flux.

My reflection on the pound-for-pound status has drawn me to one comparison above others, that of St. Pierre and Fedor Emlianenko. More than any other fighter on that list including BJ Penn and Anderson Silva, we’ve witnessed the Russian great take on his greatest challenges with an audacity not previously nor since witnessed. This characteristic is essentially the opposite end of the spectrum from where GSP’s recent criticism exists.

St. Pierre has fought three straight opponents who pose great threats on the feet (Penn, Thiago Alves, and Dan Hardy) and each time he has spent the majority of the time in each fight grinding out his opponents with peerless wrestling and relentless work from top-control. The Penn fight discounted, however, GSP hasn’t "finished" a fight since his 2008 victory over Matt Serra in their rematch (here I’m strictly considering "finishing" as the referee having to step in and stop the fight).

In addition to the three aforementioned wins, the welterweight champ owns a decision over Jon Fitch; although it’s a decision, it can be considered the last time St. Pierre attacked an opponent’s strength head on even if he didn’t earn the stoppage. With the grappler Fitch, GSP brutalized his opponent and that Fitch was still standing at the end of he fight is a testament to his own toughness and resilience.

But it’s the fact that St. Pierre has chosen to forgo any risk in these last few fights that has drawn the ire of fans. Because he is capable of imposing his will in the fight, he makes them into wrestling matches and battles of "positional dominance". He doles out punishment, but it simply hasn’t been spectacular. It’s smart, but unpopular. The one thing that separates GSP from a guy like the un-beloved Jon Fitch is that the champ is at least constantly working toward a finish, unlike "The Human Blanket" Fitch.

And this brings me to Fedor. Setting aside his recent reputation as a "promotion killer", the Last Emperor has a cemented reputation as the greatest heavyweight and possibly the greatest mixed martial artist of all time. In what is basically an undefeated career, we’ve seen Fedor go tit-for-tat with true greats at their own game, always coming away victorious. He had a kickboxing match with Cro Cop and his hand was raised. He played in the guard of Noguiera and was victorious. It’s this willingness to throw caution to the wind, to say to a critic "I don’t care if he’s ‘better’ than me at something on paper, I’ll go in to his comfort zone and destroy him."

It might be reckless abandon, but it could be the difference between being on MMA’s Mount Rushmore and having a state park named after you.