So You Have To Finish Your Opponent To Be Considered A Dominant Fighter?

Share All sharing options for: So You Have To Finish Your Opponent To Be Considered A Dominant Fighter?

That seems to be the thought process of some MMA fans as of late in regards to Georges St. Pierre, as he prepares to defend his UFC welterweight title against Dan Hardy at UFC 111 next week.  The knock on GSP seems to be that fans think he's scared to stand with his opponents since getting knocked out by unheralded Matt Serra at UFC 69.  The claim is that all he does is takes his opponents down and doesn't try to finish them.  So I took it upon myself to gather some stats and sprinkle a little common sense on the matter.  Check it:

1.  I don't believe that GSP is scared to stand with anyone.  However, the common sense approach to fighting is to win by taking as less damage as possible right?  It's also in a fighters best interest to use his or her strengths to attack his or her opponents weakness right?  Just so happens that GSP is the best MMA wrestler in the world and he can take any welterweight down at will and dominant them.  So if he can do that, then why on the world would he want to stand and trade strikes?  He's taking the path of least resistance to win.

2.  It's not like GSP has been fighting scrubs.  This guy has fought the consensus #2 welterweight in the world in Jon Fitch and Thiago Alves...and he absolutely destroyed them.  He didn't finish them, but the beating he put on them was more dominating than a 1st round TKO in my opinion.  I mean those guys were a MESS after GSP mauled them on the ground for 5 rounds and they were the #2 welterweight in the world when he beat them.  I mean usually when #1 plays #2 in any sport it's rarely a blowout right, so why do we expect so much from GSP?  Why not give credit to Jon Fitch and Thiago Alves for being tough as hell and displaying why they were rated the #2 welterweight in the world(at the time GSP fought them). 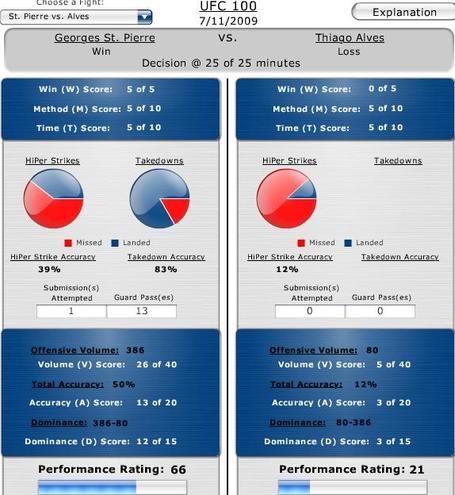 Look at those stats.  GSP had an successful takedown rate of 83% and landed Hi-Per Strikes 39% of the time.  He landed 45 strikes while standing(31 to the body/head and 14 to the legs).  Once on the ground, GSP passed Thiago Alves guard 13 times and attempted one submission.  It's not like he gets a take down and just lays in his opponents guard to lay and pray and he landed 100 strikes on the ground.  There he landed 56 strikes to the head and 44 strikes to the body.  He actively tries to get into positions to finish the fight.  Now look at what Thiago Alves did in the fight.  He's very accomplished striker, yet was only able to land 12% of his Hi-Per strikes.  So here GSP was facing a very good striker, so he took the path of least resistance and put him on his back to work him over.  Look at the performance rating for both fighters.  Incredible 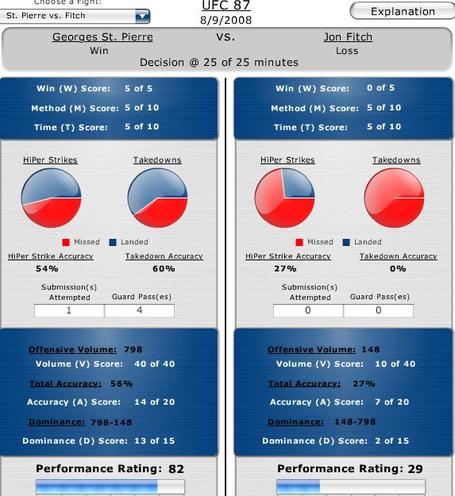 Look at these stats.  GSP has a successful takedown rate of 60% and landed Hi-Per strikes 54% of the time.  He landed 62 strikes to the head/body while landing 15 strikes to the legs while standing.  Once on the ground he acheived 4 guard passes and one submission attempt.  So again, he's working to better his position once on the ground to try and inflict the massive amount of damage.  GSP landed 74 head strikes and 34 body strikes once on the ground.  Fitch is primarily a wrestler, so GSP spent more time on the feet where he had the advantage and punished Fitch, dropping him several times during the fight.  You'll also notice that Fitch didn't achieve any take downs of his own while landing only 27% of his Hi-Per strikes.  Look at the performance rating for both fighters. 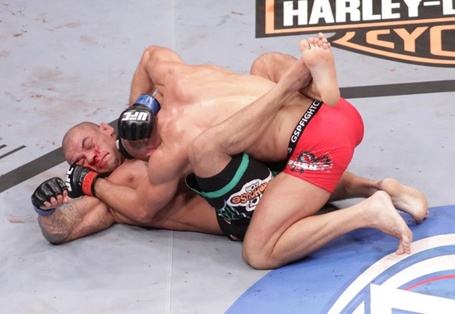 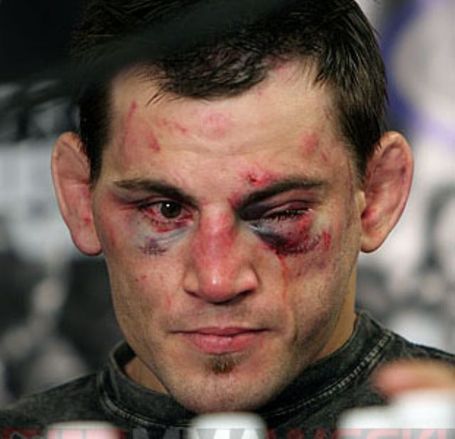 He may not have finished Jon Fitch or Thiago Alves, but he absolutely dominated them.  The pics don't lie.