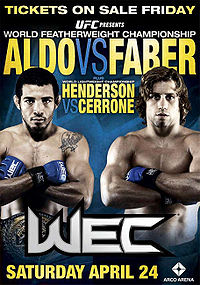 The WEC promotion will host their first ever PPV on April 24th headlined by a title fight between Urijah Faber and Jose Aldo for the WEC featherweight title.  The co-main event will consist of a WEC lightweight title fight re-match between Ben Henderson and Donald Cerrone.  The event will take place in Sacramento, California which is the home of "The California Kid" and the events usually do well there when he fights.  WEC GM Reed Harris has already stated that tickets are going well and they expect over 15,000 in attendance.  The card thus far is shaping up nicely as well with the PPV price checking in at $44.95.  Check out the card: