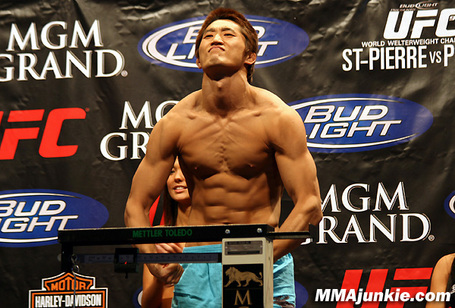 Congratulations on 4 straight wins. Tell us how you feel?

Yeah I had come off a pretty long layoff(injury). I couldn’t win by KO but I

dominated the fight so im pretty happy with it.

You seem more confident against Amir than before. What was the reason?

Yeah before you knew it I had five fights n the UFC. I like the way Jon Fitch fights very relaxed almost like he’s sparring. I want to learn but its hard for me. Until after the fight I felt a lot of pressure. It was very hard for my previous 4 fights to get use to the Jetlag and difference in time in America. I hadn’t fought in a long time so I guess you can say I was itching for a fight. I think I’m getting more and more used to fighting in the octagon.

Is your injury fully healed?
I can spar and do the standup. But for ground sparring I avoid using my injured arm too much. You have to be careful after getting surgery about not pushing yourself too much. And my fingers are a bit busted(injuries from his judo days) but luckily in mma there is no Gi so its not a big deal.

So what do you think about your next opponent Nate Diaz?
I’ve seen him numerous times in the waiting room for fights but I never thought we would ever fight because he was fighting at LW. But on a personal level I love the Diaz brothers for always putting on a show and have always wanted to fight them. Even in sparring or in the UFC. Now its for real my mentality is "If I don’t kill him he will kill me", I am researching him a lot.

Diaz has average wrestling do you believe this is your advantage?

Actually the style I hate to fight the most is short guys with ko power and good takedown defense. But the lanky fighters like, Carlos Condit, and Nate Diaz have always been my bread and butter. But Diaz has amazing cardio so going one dimensional with wrestling is not a good idea. So I plan on mixing my game.

In America you are famous for your grappling mostly and most of your fellow training partners(Korean fighters) have all said your grappling is at the highest level. What do you think?
Actually I don’t care too much about my wrestling. I want to bring m

y dynamic game I brought in Japan where I was KO’ing everyone. I like to fight incredibly exciting and all out.

But at the moment it is a very important for me to represent Korean fighters and in the UFC winning is more important than putting on a show like in Japan. So I fight safe but trust me if I feel like im down in the card my mentality is to kill or be killed.

But so far I haven’t really felt the need with any of my opponents. But if there is opponent that can put me in that position I will fight like a madman. But at the moment winning is the most important.

Nate Diaz is a cardio machine. Are you worrying about your cardio?
I have been doing conditioning in America and a lot of cross fit but to be honest I don’t think it was working out too well. I’ve been doing another style of cardio work involving a lot of explosiveness and explosive runs. And I feel it’s working really well.
But now that I’m older and not a young 20 year old guy its hard for me to compete pure cardio wise to younger fighters. But I’ve learned the most important with cardio is how you pace yourself in a fight.

Do you change your training to fit the opponent?

Not really the most important thing is to do everything. Striking, ground. Just because an opponent is weak at wrestling doesn’t mean you should ease off the wrestling training. I like being as well rounded as possible.

Tell us about your trainer Yang Sung Hoon?
He’s been a huge help. He has so much experience but he never rest and constantly researches the fight game. Sometimes a coach can get lazy but he works incredibly hard and always has passion. He will even personally go to other gyms to find new techniques to help his athletes. I really admire him so much. He is the type of man that has a lot of troubles and hardship but covers it up enthusiasm.

You have been starting to guest in famous Korean variety shows do you think you re becoming more popular?
Too be honest I’m pretty far from star status. But I began to become aware and how important these tv shows and things not related to fighting is important to your career.
After being in a couple of shows they began to show my fights on reruns on TV. Its pretty overwhelming seeing yourself on TV sometimes.

But I love going to these shows and representing Mixed Martial Artists. I want to show what dedicated athletes we are and that we train as hard and seriously as Olympic athletes. Just because you are decent in a couple of street fights doesn’t mean you’ll have any success in MMA.

Is it a bit uncomfortable for a fighter to be on these variety shows?
Yeah at first I was a bit a shook but I’m pretty confident about my talking and I’m a pretty funny guy . So I got used to it, but I cant do acting or anything like that.


What do you what if you beat Nate Diaz?
I want a top contender. Karo was pretty tough but I want someone even higher up, I don’t think people in America really know how complete my game is so I want to truly put an impact to make the fans remember me. But most important is this fight. I will work real hard and get an impressive victory.

But who specifically would you want to fight?I don’t care I’m not greedy. But id love to fight Jon Fitch and Jake Shields. Actually Shields the most. He has good wrestling but I’m 100 percent confident that he wont be able to take me down. Yeah I’d love to fight Shields.

George Saint Pierre, Jon Fitch have great wrestling do you think your wrestling is at their level?

To be frank, yes. In wrestling/judo I have real confidence in my game. But more than wrestling I think my clinch is real good. Actually I’ve trained with American NCAA wrestling champions and they got me with double legs but it was very difficult for then to take me down.

Actually I always manage to take their back in the end. Not to be arrogant but I have a very unorthodox ground style that people who have never seen at first always get flabbergasted. If you break the key to my style the outcome could be different, but for people who grapple with me the first time they got caught off guard constantly. I also used to train with Japanese MW mma star Okami and we would always be back and forth.

fights in the UFC. What do you think of this?
I actually love that. There is a lot less pressure when people expect you to lose.

Your fellow Korean fighter Chan Sung Jung(Korean zombie) lost in the WEC. What do you think of this?

I have actually trained with George Roop many times. He’s tall but to be honest his weakness is his ground game and nothing else was too extraordinary. So I thought Chan Sung Jung would run through him and win in the first round. But it was obvious Roop had researched Chan Sung to a tee and used his reach to frustrate Chan. To be honest if there is a rematch there is no doubt in my mind Chan would win.

I think the pressure of having to have a crazy fight put too much weight on his shoulder. This fight proves its not always about technical skills but sometimes how the mental is the most important.

Can you say something to Chan Sung Jung?
I’m sure you have learned a lot from this. I believe that from this you will only grow stronger. You have already done great for yourself so in your next fights don’t think too much about a exciting performance and just fight to your best ability.

Your fellow Korean teammate Dong Yi Yang also lost in his UFC debut. What do you think of that?

To be honest he definitely won the fight on the scorecards but its not your home country so things like that can happen. It happened to me (talking about Karo fight) but I would say the octagon jitters, jetlag , and inexperience(he gassed in the last round) led to him not winning the fight decisively. But skill set wise I have no worries about him, he is a challenge to anyone in that division. Hard head, good striking, from a wresting background and he is seriously as strong as an ox.

Say something to the fans.

Even though Korea’s mma scene is tiny and the facilities bad I am fighting in the biggest stage as a Korea fighter and there are so many fighters in Korea at my level who don’t get the chance. So my one wish is for fans to talk and spread the word about the Korean MMA scene in Korea because there are so many elite fighters who get no recognition and no money. I don’t want only my team to do good but all the Korean MMA teams to do good.

Actually I was getting a lot of hate mail from Koreans(for not being exciting) for a period of time. But I really wish the fans can understand how difficult it is to survive in the UFC and than you have to win fights to get tough opponents. So this is when I need your cheers the most.

To be honest sometimes I am so thankful when knowledgeable fans watch my fight. It you study the groundwork a bit more you will see that ground battle is actually very exciting.

But in the end the most important thing about fighting is the fans. I will always be thankful for you guys and I will come home with a victory.