Last week I had the chance to catch up with Leonard 'Bad Boy' Garcia, who will be the first WEC fighter on a UFC card since the recent Merger announcement. He will be making history Dec 4th when he competes against Tyler Toner on The Ultimate Fighter 12 season finale. This will be UFC's first ever Featherweight Match-up. 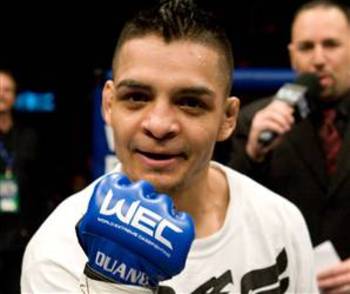 Detroit Drew: Any thoughts on the WEC-UFC merger that you're willing to share?

Leonard Garcia: I love the idea. It means a comeback to the UFC for me.

Detroit Drew: Do you expect this to mean higher pay? Which UFC 155'ers do you think will drop down to 145 now?

Leonard Garcia: Higher pay as far as bonuses, yes, but our contracts will stay the same I think some will move up, others will move down, but nothing crazy. Not really a huge change just the name difference the UFC is more prestigious.

Detroit Drew: With your contracts staying the same, does that mean that on average, WEC fighters already made as much as UFC fighters (minus bonuses)? Or do you expect the lower divisions to make less than average? Do you expect the merger to make the 155-pound division the strongest and deepest in the UFC? Do you think the pending merger had a lot to do with Aldo turning down the Florian fight? It seems that the incentive for him to move up in weight is gone now with the merger. Which WEC fighter do you expect to have the most success at 155?

Leonard Garcia: I think we will make just as much as the big fighters now as long as we perform. I think it's definitely the reason Aldo isn't moving up, he still has a few great match-ups at 145! The 155 division is definitely getting deeper with the addition of Cowboy (Cerrone), (Anthony) Pettis, (Ben) Henderson ... it's gonna be fun to watch. I feel like those three will make the biggest impacts in the division.

Detroit Drew: You're going to be one of the first WEC fighters to fight on a UFC card after the merger announcement. What does it mean to you to be back in UFC and what are your thoughts about your opponent Tylet Toner?

Leonard Garcia: I'm excited to break the ice for the WEC guys. Although it's a comeback for me, it feels great, Tyler is a friend of mine and it's gonna be a tough fight.

Detroit Drew: Can you comment on the stigma the Jackson camp has received lately with the style of fights and gameplanning? You're the last guy who would be pegged as a "lay and prayer" and you're one of Jackson's most well-known fighters.

Leonard Garcia: Greg always makes us look for finishes. We do not lay and pray!

Detroit Drew: As a Mexican-American, can you comment on how the UFC marketed Cain Velasquez leading into his recent title fight with Brock Lesnar?

Leonard Garcia: I think the marketing for Cain was great. He's a great fighter and he's set the bar high for Hispanic fighters in 2011.

Detroit Drew: Are there any sponsors you would like to thank, or any shout-outs? Any fighters on the rise we should be aware of and keep our eyes on?

Leonard Garcia: Tapout, Hattsfield Gunsmithing, Team Jackson and most of all, God.