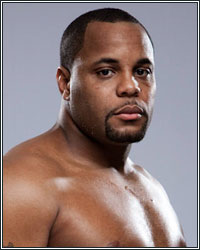 NNR - mmamania.com - Is MMA really destroying amateur wrestling? Seeing how guys would rather make money soon than be broke while trying to be Olympians or is it overhyped?

Daniel Cormier (DC) - I wouldn't say it's killing wrestling although guys are lured to mma we still have great guys competing. We have lost a couple guys to mma. Johny Hendricks and Jake Rosholt were both gonna be in the mix to be on Olympic team in London. USA wrestling has made an attempt to make wrestlers more money with the fuel the dream fund. If anything I believe mma will help wrestling because kids will want that base in order to become mma fighters.

Deuce02 - mmamania.com - Could you talk a little about training camps and the major differences from prepping for a mma fight vs preparing for the Olympics. How do these athletes compare? Which training do you find to be toughest, AKA or the stuff you did with the national teams? How would you rank the wrestlers at AKA or someone like GSP vs the wrestlers you saw and competed against at the Pan Ams and the Olympics?

DC - In my opinion the wrestling training was a little harder. I am able to train 6 days in a row in mma and I had to have a day off after three days of wrestling training. The difference is when I was training for a world level comp I was training with best the U.S. had to offer on a daily basis so that made it really hard. There isn't a comparison between GSP or any other guy with the world’s best wrestlers. These guys have skills that they have developed over a lifetime. The guys at the world level are amazing. Go to flowrestling.org and search 2010 world championships and watch a few matches highlights and u will be amazed.

Jay - MMAmania.com - Can you elaborate on the differences in cutting weight when comparing your wrestling background to MMA? Do you deal with weight cutting at all now considering you fight below the maximum weight for your division?

DC - Cutting weight is cutting weight. I am lucky right now because I don't have to cut any weight to fight right now. It's always hard. Guys that fight mma do cut weight a lot safer than most wrestlers do. Wrestlers suck off a lot of water and mma fighters’ diet down.

Bigger Zino - mmamania.com - What was the first additional martial art that you felt you needed to tap into to compete and be relevant in MMA. With a great wrestling background – what was the first, next step? (arm.bar.bandit - mmamania.com adds) If you were forced to practice only one art, other than wrestling, in training for an upcoming title match, which martial art would you choose and why?

DC - The first thing I had to start to learn was the stand up. I see how important it is to be a complete mma fighter (Cain) and someone who is one dimensional. If I had to choose one sport it would be kickboxing. I would get with Javier and just go to work.

DC - There are many guys in the world that could give me major trouble on the ground. Toughest fights for me right now are Barnett, Werdum and Fedor. I believe I could compete in ufc. I also believe all guys in Strikeforce could and also Kole Konrad. We are all able. It's only a company, doesn't make their fighters better. Everyone is working hard to attain their goals. I wouldn't fight guys in my gym. We go to work every day together. Outside of the gym only two guys I wouldn't fight are King Mo and Rashad Evans they are like brothers to me.

Freedomthrtyfve - mmamania.com - Daniel, you have signed with Strikeforce for 8 fights, if you’re lucky and have no injuries, you will do these in 2 years. Is that not a really big commitment, I mean 8 fights is a long time, what was your thinking behind that decision?

DC - Yes I did I am planning on being done with my Strikeforce contract by august. That would be two years from when I started. I liked the stability of the long term contract. I also liked that Strikeforce showed that they were investing in the Daniel Cormier brand and I am forever grateful to them for that.

Neil - mmaforreal.com - I'd like to know what it's like fighting so frequently, It seems like a lot of guys say they want to stay busy, but only get three or four fights a year tops, whereas you have averaged almost one fight every other month?

DC - It was a great experience fighting really often. With that being said it also had it’s negative sides. It was really hard dealing with the emotional and adrenaline dumps after the fights. Left me feeling really drained by the time that month was over.

Ulf Murphy - mmamania.com - As a wrestling based fighter who has finished all of his professional fights, what is your opinion on wrestlers who only look for positional dominance, but do not finish fights?

DC - I'm not against it because it's honestly about getting your hand raised. I honestly don't think these guys aren't trying to finish. It's just that they are fighting really good guys. When a question like this is asked I think of Fitch. He's fighting the world’s best guys consistently. These guys are really good and really hard to finish. Trust they are trying, I honestly believe we have to look at opponents and commend them for their toughness.

THORAZINE - mmamania.com - Since you train at AKA you must have watched Fitch and Kos spar, who generally gets the best and worst of it? In what area's? Who would win in an MMA fight if the two of them were ever matched up?

DC - I watch these guys spar all the time and honestly it goes differently every time. Every time I watch them I realize how they both have gotten to the point where they are. Iron sharpens iron. I have no idea who would win a fight. Hard to judge it's really that close.

Onemansyn - mmamania.com - Recently you were part of the team that prepared Cain for his bout vs Brock. Cain went out of his way to make sure people knew you were a big part of his camp. And also after the fight, mentioned that you were a big part of his win as well. Daniel, how does it feel to have been a part of not only UFC history, but of pugilistic history as well? Did Cain’s fight go as planned? Did it go as you envisioned? Daniel, how does it feel to receive so much credit and praise from the fighter you put in so much time and work with? Finally, how did it feel to see the culmination of your work, your training and knowledge?

DC - Watching Cain accomplish his goals was a great feeling. It never was about any of us, me, Dave, Jav, or Bob. It was about Cain. We were super lucky to be part of something so special. Watching a game plan come to fruition is amazing to see. We all spent countless hours with Cain preparing. Easiest coaching job of my life. Cain is a sponge and never questions anything. Great person and a great competitor. He will be champ for a while. 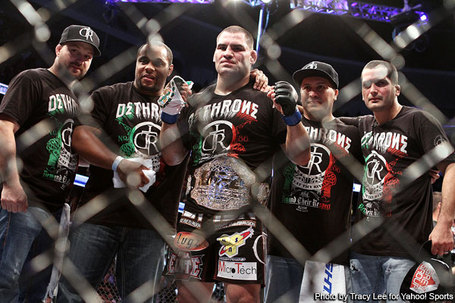 Kenwoo - mmamania.com - Daniel, you helped coach Aaron Wilkinson on TUF 12. How was his wrestling in comparison with the American stand up fighters? Do you think European fighters will always be at a disadvantage, without high school wrestling experience?

DC - Aaron was a joy to work with man. Not only did he fight hard he worked harder than anyone else, and really earned that wildcard spot. His wrestling was a little behind the rest of the guys but he worked diligently in that area to improve. English fighters need to start wrestling earlier. We Americans start as kids. So naturally we have an advantage.

The Greg - mmamania.com - What was being an assistant coach on TUF like? Did you learn anything from the experience that will help your career moving forward? How do you anticipate the upcoming fight between Koscheck and GSP going?

DC - Working tuf was amazing. Everybody at the UFC and tuff boy productions treated us great. Top flight organization. I see it being a really tough hard fight. Just as the 1st one was. Kos has all the tools to win this fight. And I am being as objective as I can be.

Ulf Murphy - mmamania.com - How has the death of your daughter, Kaedyn, affected your fighting career?

DC - Kaedyn Imri Cormier was the most beautiful little girl in the world. She was and always will be my guiding light. Everything I have done and will continue to do is in honor of her.

s.c. michaelson - watchkalibrun.com - I remember you backing up King Mo when Rampage was talking sh*t on Twitter about Mo losing to Feijao, how close are you to King Mo? Do you feel that black athletes (especially in a sport like MMA where they are underrepresented) should sort of look out for each other? Did that incident cause you to lose some respect for Rampage?

DC - I am really close. I have known Mo for 12 years. I met him as an Afro kid from central Oklahoma lol. And we have trained together throughout my career. He was my training partner in Athens and has always been instrumental in my preparation in wrestling and now mma. I think fighters as a whole should stick together man. We have a long way to go for this sport to be where we need to be. Rampage is a legend man. And I was hoping he would carry himself in that way. In that instance he didn't. Hold yourself to a higher standard as a legend and pioneer of the sport.

Yan117 - mmamania.com - Is there anything left of your French heritage or is everything long gone many generations ago? Can you understand French?

DC - I don't understand French. My mom and them speak it. Mostly when they are trying to talk around us lol.

Thanks for the questions everyone. There were some really good ones. I appreciate you guys taking the time to write in. Look for me soon hoping to get back in the cage soon. DC 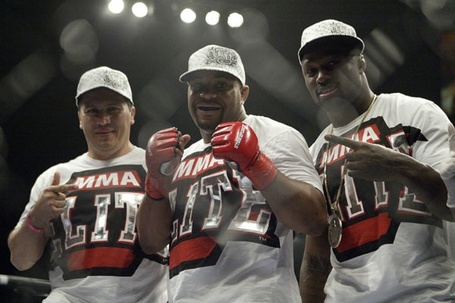