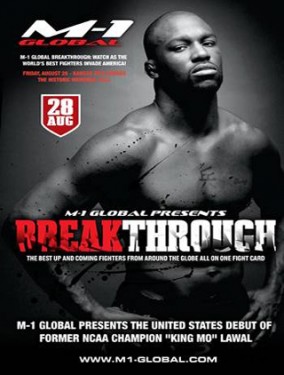 With the change in venue comes a change in the original main event, which had been set to feature "King" Mo Lawal and UFC veteran Don Frye. Frye has formally pulled out of the fight and has been replaced by another former NCAA Champion and All-American, Mark Kerr.

Mark Kerr(15-10) was one of the most formidable fighters over a decade ago, but has since fallen on hard times losing his last four fights.  Mark Kerr could be even a step down from Don Frye, as both fighters are way more experienced than Lawal.  However, both fights are fights that Lawal should win regardless.

Also,  I suppose M-1 is trying to add some intrigue to the card with the exhibition between Fedor and Mousasi:

In addition to Lawal vs. Kerr, "Breakthrough" will now also feature a sparring exhibition between Strikeforce fighters Fedor Emelianenko and Gegard Mousasi.

"We were blown away by just how popular Fedor’s exhibition vs. Aoki in Japan was," said Raimond. "Fedor and Gegard have sparred many times together and the sessions have always been intense. Now fight fans watching on television and those attending live in Kansas City will get a rare glimpse at two of the best fighters in the world sparring each other."

There will be no judges since it's an exhibition bout.  On a side note, Mousasi is scheduled to fight Renato "Babalu" Sobral on August 15th with the M-1 event being less than two weeks later.