Could Rich Franklin vs. Dan Henderson II At UFC 103 Be In Jeopardy?

Share All sharing options for: Could Rich Franklin vs. Dan Henderson II At UFC 103 Be In Jeopardy? 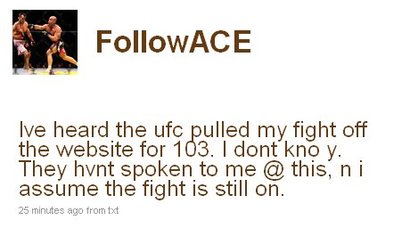 Franklin posted this to his twitter account yesterday, and as of a little while ago the fight still wasn't listed on the UFC website.  A lot of fans on the internet reacted negatively when the fight was announced, feeling as though the fight wasn't main event material and it was too soon for a re-match.  Also, Dan Henderson just fought as a middleweight, so a decision on what weight the fight would take place would have to be made as well since Franklin is a LHW now.  Also, this event will be going heads up with the Mayweather/Marquez boxing match, so I'm sure Dana White wants to win that PPV battle as well.   I think it's safe to say that Ortiz will be coming back to the UFC, we just don't know when.  Which could mean we could see this being Tito Ortiz's return to the octagon after a year and a half hiatus.  I'm just speculating here, but would you rather see Ortiz fight Rich Franklin or Dan Henderson at UFC 103 if this is the case?