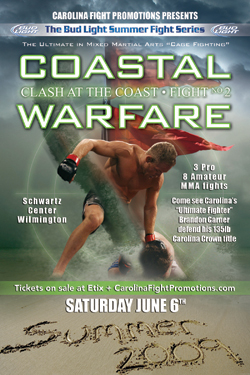 Carolina Fight Promotions presented their 3rd installment entitled "Clash At The Coast 3" this past weekend in Wilmington, NC.  It was a night of submissions as 8 of the 12 matches ended via that method.  The main event saw TUF alum and North Carolina native Brandon Garner retain his Carolina Fight Promotions Bantamweight title in the main event via knockout.  The results of the rest of the card are after the jump.