Nick Diaz: "I Want To Fight The Best"

Share All sharing options for: Nick Diaz: "I Want To Fight The Best" 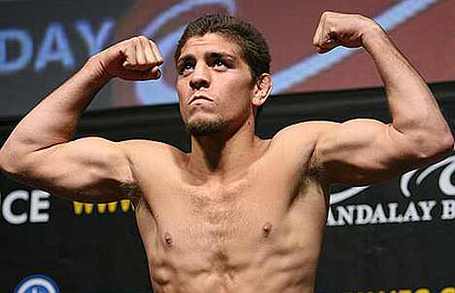 Nick Diaz spoke to Sherdog after submitting Scott Smith this past weekend at Strikeforce: Lawler vs. Shields.  He had some interesting comments on fighting the best, and his love of the sport.  Check it:

I want to fight where I'm going to make the most money (and) I'm going to get the best fight. If I'm going to be fighting at 185 pounds, I don't want to fight Scott Smith. Then (if) I lose to Scott Smith, this guy hits me with one of them wild punches and knocks all my teeth out — what the (heck) am I left with then? At least if that happens (if) I fight Anderson Silva, and then that happens to me, everybody's like, 'Well, you did good.' But they expect me to win and then I lose to someone like this, it's just (expletive). I think I've worked hard enough and done enough to fight the best in the world.

I said it in the Strikeforce open thread, I would pay to see Nick Diaz fight Anderson Silva.

You love and hate it, you know what I mean? I love fighting and I love competing, and I fight the best in the world and be the best in the world, but as far as this sport goes, it's dirty rotten, just like boxing. As far as I'm concerned most sports are pretty crooked; that's just the way it is.

Hey, I love jiu-jitsu and I love fighting and I love competition. But do I love this sport? (Heck) no.