Should Urijah Faber Get Another Shot At Mike Brown?

Share All sharing options for: Should Urijah Faber Get Another Shot At Mike Brown? 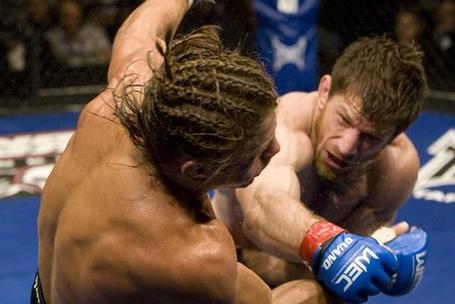 Urijah Faber lost to Mike Brown for the second time this past weekend at WEC 41. The contest was a spirited one, as the fight went the distance in what was a very competitive bout. I normally wouldn't advocate seeing a 3rd fight between two fighters in which one of the fighters has beaten the other twice. I take nothing away from Mike Brown, and I picked him to defeat Urijah Faber in this second matchup. He has two legitimate wins over Faber. However, I expected him to be able to put Faber away again, especially after it was clear that Faber was injured. I'm not saying that Faber would have won had he not suffered the injuries. It's clear that Brown dictated where the fight took place for the most part. Luke Thomas is quick to point out several instances in which fighters have suffered injuries only to go on and win the fight. However, none of those fighters were fighting the #1 fighter in the world in their weight class during those fights.

Mike Brown has two wins over Faber, but from a fan perspective, it's like I'm missing something. It's like the first fight you couldn't really learn much from it because the fight was over so quickly. The second fight was much more of a competitive bout, but just how big of an impact did the injury have on the fight? It's like I still don't have a definitive ending even though they have fought twice. WEC 41 set the all time records for money at the gate and attendance, but the ratings on Versus hasn't been released yet. I'd imagine that if the ratings are good enough, it's possible that we could see a Faber vs. Brown 3 at some point.

So I ask you that if Faber heals up and got another win, would you be interested in seeing Urijah Faber vs. Mike Brown 3?