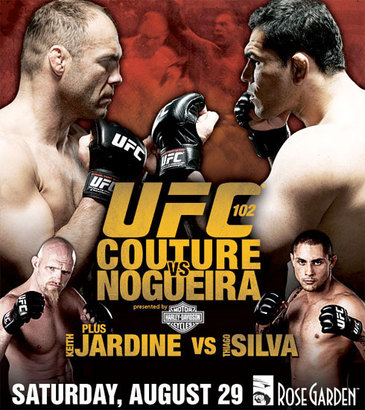 LIVE FROM THE ROSE GARDEN – SATURDAY, AUGUST 29, 2009Las , NV (USA) – The Ultimate Fighting Championship® (UFC®) is headed to Portland for the first time ever and it’s bringing a couple of true heavyweight heroes. Mixed martial arts legends and former UFC champions Randy "The Natural" Couture and Antonio Rodrigo "Minotauro" Nogueira will face off for the first time in their storied careers at UFC 102: COUTURE vs. NOGUEIRA, live from Portland, Oregon’s Rose Garden on Saturday, August 29, 2009."We’re extremely excited to be heading to Portland," UFC President Dana White said. "When you get two mixed martial arts legends that are all heart and have wanted to fight each other for years, plus the fact that Randy has roots in Oregon, that tells me that not only will the crowd be electric but it’s also a night where the fighters will be looking to cement their legacies."Tickets for UFC 102 will go on sale Saturday, June 20 at 10 a.m. PT and will be priced at $600, $400, $300, $200, $100 and $50. Tickets can be purchased at the Rose Quarter Box Office (M-F 10 a.m.-5 p.m.), all participating Safeway/ TicketsWest outlets, by calling 877.789.ROSE (7673), or at ComcastTIX.com. For more information please visit RoseQuarter.com. Prices do not include service charges.

It's good to see the ticket prices for this one will be somewhat affordable.  Anyone planning on going to this one?