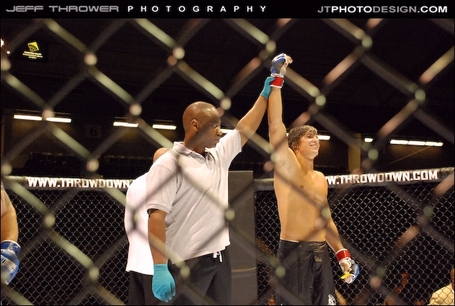 MMA4Real has interviewed North Carolina MMA fighters from all walks of life.  We've had guys that are champions, fighters that have gotten into the sport later than usual, fighters that are undefeated pros.  However, MMA4Real was able to catch up with a young, undefeated fighter that kind of fell into MMA by chance.  Chris Kirkpatrick(3-0) is a college student that's fighting for a hobby as of right now.  Chris tells us the bizarre story of how he got started in MMA, why a submission is better than a KO, and why GSP will beat Thiago Alves at UFC 100.  Let's get it:

Kelvin Hunt-Chris, tell us a little about yourself and how you got into MMA?

Chris Kirkpatrick-Well I am 20 years old, and live in WIlmington NC.  I played soccer, basketball, and a little baseball throughout high school so when I graduated I wanted to find something competitive to do in college.  I was thinking about boxing but I couldn't find the boxing center and the girl that cuts my hair told me that she had a friend that used to go to Champion MMA , so I went by the gym and signed up for classes.

Kelvin Hunt-Wow, talk about a chance meeting...lol.  Was MMA always on your radar or is it something you just kind of just fell into as the sport began to grow?
Chris Kirkpatrick-I had seen MMA on TV but I didn't know that it was called MMA and that that was what I was signing up for at Champion. Haha, I didn't even know that Brazilian Jiu Jitsu was on the ground when I showed up for my first class. But I trained and competed in BJJ for a little over a year before I signed up for an MMA match.

Kelvin Hunt-LOL!  Dang.  Where do you currently do most of your training and what's the best thing about training there?
Chris Kirkpatrick-I train at Champion MMA in Wilmington. I'd say the best part about training there is that it's really laid back and I get to work out with great instructors like Lamaine Williams, who's a brown belt under Rubens "Cobrinha"  Charles, and Jesse Collins who is our stand up/MMA coach.  We've got a really good team here and there's no egos so it's alot of fun to train.

Kelvin Hunt-You are currently undefeated and riding a 3 fight winning streak while finishing all of your opponents.  What's next for you and when will we see you back in action again?
Chris Kirkpatrick-Well, I just got out of school for the summer so I'll probably spend all of my time training and hanging out at the beach.  I'm thinking that I will probably fight again in the fall but I'd like to compete in some Jiu-Jitsu tournaments between now and then.

Kelvin Hunt-You have won via submission and via KO.  Of course a win is a win, but which method gets your adrenaline going the most and why?
Chris Kirkpatrick-I like both and I really just want to win. I like submissions more because when you submit someone you get to control your opponent and make your opponent give up/ tap out. With that being said, most of my friends have no idea what is happening when the fight goes to the ground but everyone understands a KO.

Kelvin Hunt-God forbid something were to happen.  If MMA doesn't work out for you what would you see yourself doing?
Chris Kirkpatrick-Haha, well MMA is just a hobby for now but I am going to school and taking business courses so hopefully there will be a job waiting for me somewhere when I get out of college.

Kelvin Hunt-Yessir, get that education for real.  What do you like to do in your spare time and/or what are some of your hobbies outside of MMA?
Chris Kirkpatrick-When I am not training or going to school I like to go to the beach with friends, hang out with my dog, and maybe play a little soccer.

Kelvin Hunt-Talk to us about fighting in North Carolina and give us your thoughts on how the sport in growing in our state?
Chris Kirkpatrick-All three of my fights were in NC and I've never been to a fight out of state so I don't have much to compare it to but so far it's been great and everyone's been very receptive.   The sport has really blown up in NC since it was legalized. I think it's such a popular sport because there are so many different components to MMA that most people can find at least one thing that they are good at.

Kelvin Hunt-I don't know if you are much of a gamer.  Who would be the first fighter you would pick whenever the UFC video game is released?

Chris Kirkpatrick-I don't play alot of video games and I don't think I would be good enough with the controls to bust out any of Anderson Silvas combos so I would probably pick someone like Jon Jones, just so I could toss people all over the place.

Kelvin Hunt-I'm wondering if they are going to have his crazy moves in the game?  Give us your quick thoughts on GSP/Alves at UFC 100.  Who wins and why?
Chris Kirkpatrick-I would never bet against GSP. He has been so dominate lately but I think that Alves will be an interesting match up since St. Pierre has never fought a pure striker before. All of his wins are against grapplers that he was able to be at their own game whereas Alves has faced similar style match-ups. I think GSP's conditioning will be too much for Alves though. St. Pierre wins by ref stoppage.

Kelvin Hunt-Pretty good analysis there.  Do you have any parting thoughts and/or anyone you would like to thank?

Chris Kirkpatrick-Thanks to Mr. Maynard, Lamaine, Jesse, and everyone else at Champion who's teaching me how to do this MMA stuff.
MMA4Real would like to thank Chris for joining us here on the site.  Good luck in school as well as in the cage and we hope to have you on again.