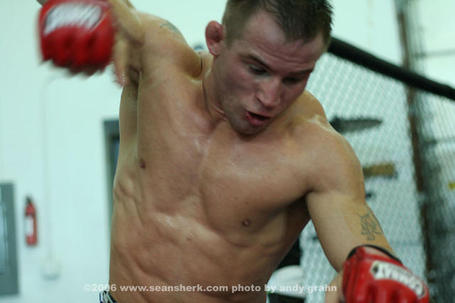 "The Muscle Shark" Sean Sherk (35-3-1) has always been a great athlete. Even at a very young age he gained a reputation as an impressive wrestling talent. After placing in the state all four years that he wrestled in high school, Sherk decided to forego college. It wasn’t long before he began his fighting career, competing in small shows throughout the Midwest and quickly gaining a reputation as an incredibly talented prospect. He then moved on to fight for bigger shows such as King of the Cage here in the States and Pancrase in Japan. His fighting career has taken him all over this nation and abroad. Sean’s resume reads like a who’s who of world class MMA opponents.

He has fought the best that the sport has to offer. One thing that makes his record even more amazing is the fact that he has spent almost his entire career fighting above his natural weight class. At 5’6", he routinely found himself fighting welterweights that had a distinct height and size advantage. It never seemed to matter. Sherk has triumphed over and over against some of the sport’s best. In October of 2006 he finally reached the pinnacle. Sean defeated Kenny Florian to claim the vacant UFC lightweight world championship. Since then he has defended against Hermes Franca, lost to B.J. Penn in the biggest superfight in lightweight history and then got back into the win column yet again against talented UFC lightweight Tyson Griffin.

Sean’s explosive wrestling ability is immediately apparent when watching him fight. But it’s the crisp combinations, freakish conditioning and iron chin that he puts together with his wrestling ability that makes Sean one of the top few lightweight fighters on the planet. So at 35 years old, what is left to accomplish? Sean is now scheduled to fight Frankie Edgar (9-1) at UFC 98 on May 23rd in Las Vegas. I recently spoke with Sean, who is in the final stages of preparation for this upcoming fight, and here is what he had to say:

Rich Wyatt: How are you feeling mentally and physically heading into your next fight with Frankie Edgar?

Sean Sherk: I feel good. I mean, I’m excited. My training camp has been really good and I’m excited to see the final results. I’m anxious and ready to get out there to get the job done.

Rich Wyatt: Your last opponent, Tyson Griffin, was a contender in the lightweight division.  Edgar has a win over him as well and has looked very good thus far in his young career, so give us your thoughts on Frankie Edgar as a fighter:

Sean Sherk: I think Edgar is tough and underrated. The guy’s got good wins over Tyson Griffin, Spencer Fisher and Hermes Franca, a guy who fought for the title. I expect him to be tough. His style is like mine. He’s strong, fast, explosive and just real aggressive. I think this has the potential to be fight of the night.

Sean Sherk: You know, it depends on Frankie. What kind of fight does he want to make it? We’ll have to establish striking, grappling and submission. You have to be three-dimensional out there. The fight will probably have lots of different aspects. I always make sure that I’m prepared for whatever happens. I’ll get out there and let the cards fall where they may.

Rich Wyatt: I read that you mentioned you would like to fight Diego Sanchez when it was announced that he was moving to the lightweight division.  Give us your thoughts on his performance against Joe Stevenson, and what advantages you would have against him if you guys fought?

Sean Sherk: You know, Diego always look tough. That’s why I want to fight him. He was a top guy at 170 for a long time. He looks good every time, including his most recent win against Joe. It was a good first fight to introduce him to the lightweight division, I think. It’s funny because some people took it as disrespectful that I mentioned him as an opponent, but I asked to fight him out of respect for him. We’re both great fighters and I think a fight between us would be exciting.

Rich Wyatt: Diego has gone on the record saying that he's been given word that he'll earn a title shot with a dominating win over Clay Guida at the TUF 9 Finale.  As the former lightweight champion and given the fact that your only loss at lightweight has come against the current champion, how do you feel about that statement?

Sean Sherk: Well, I would hope I’d be closer in line. I’m the former champion and have looked good lately. I would hope I’d be closer in line. If I beat Frankie, I’m not sure where that leaves me. I only want to fight the best, you know? I’m a guy who wants to challenge myself. I’ve got no interest in fighting pretenders. I’ve been in this industry for 10 years. I only want tho fight the best. That’s what gets me out of bed every day and makes me want to train. I’d like to fight either the winner of the Penn-Florian fight or the winner of Guida-Sanchez.

Rich Wyatt: Speaking of the current champion, BJ Penn, give us your thoughts on him not defending the LW title for over a year.  Also, having fought both men, what are the odds that Kenny Florian can beat BJ Penn when they fight later this year?

Sean Sherk: As far as B.J. not defending the lightweight title, it put everybody at 155 in a hard spot. Now I’ve got to fight more times before I get a title shot. Now I’ve got to fight that many more times to get in line. You should defend the title 2 or 3 times a year. That’s what everybody else does. It’s frustrating. As far as their fight, I don’t see it going good for Kenny, I really don’t. Anything can happen in MMA and their both talented guys, but I don’t think he’s got the physical attributes to beat B.J. He doesn’t really hit hard enough and I don’t think that he can take B.J. down. But we’ll see.

7. Ok, let's step away from the cage just a little bit.  You signed on with Round 5, which produced North America's first official MMA collectible figures.  How does it feel to be able to say you have your very own collectible figurine, and did you ever think you would be able to have something like this happen in the sport of MMA?

Sean Sherk: No, never. It feels pretty good. It’s surreal when I see them in the stores or at seminars. People come up and want me to sign them. It’s pretty cool. I think it’s neat to see.

Rich Wyatt:  I understand you did a lot of work with your figurine, since Round 5 allowed you guys to provide input, etc.  Which features on it did you particularly want to emphasize, and in hindsight is there anything on the figurine that you would change now after looking back on the whole process?

Sean Sherk: The good part was that I was able to be a part of the whole process from the beginning, from the pose to the pictures at the gym and the pictures of my tattoos. Even other details like the sponsors on the shorts and the quotes that went on the box and packaging. It’s very personalized and I feel like contributing to the whole thing was fun. It wasn’t slapped together and put on a shelf. Having a part in producing it was fun.

Rich Wyatt: Give us your thoughts on the new UFC video game, and have you had an opportunity to play it yet?

Sean Sherk: I did have an opportunity. Two weeks ago I was at an appearance and they had the game there. I don’t even know for sure if I’m on it, believe it or not. I can’t seem to get confirmation either way. It was pretty realistic. It definitely takes getting used to the controls. It’s going to take some skills to master, which is good. I’m excited for it to come out.

Rich Wyatt: What is something about Sean Sherk that very few people know?

Sean Sherk: (Laughs) I don’t know if there is much left that they don’t already know. I mean, I guess I would say that some people don’t know that I’m really a down-to-earth guy just like everybody else. I love to hang out with my kids. I love riding snowmobiles in the winter. I enjoy the beach and volleyball in the summer.

Rich Wyatt: Sean, the three losses on your record have come against arguably three of the best MMA fighters of this generation.  Of those three losses which one would you most want to avenge and why?

Sean Sherk: The one I’d like to avenge the most would definitely be Penn. We’re still in the same weight class and he’s got the belt. That’s what I want.

Rich Wyatt: I know you used to fight at 170, and you've been the world champion at 155.  Would you ever consider going back up to fight at 170 again?

Sean Sherk: You know, I’ve got no interest in fighting at 170 anymore. I walk around at 175 and always have. Even when I fought there I was a small 170 pounder. The competition there is so tough now that you really can’t give up 15-20 pounds to a guy. I feel comfortable fighting at 155 and that’s where I’ll stay.

Rich Wyatt: Give us your thoughts on Hughes vs. Serra.  Who wins and why?

Sean Sherk:  Being that Hughes is here training with me now and I get to see how ready he is, I’d say him. He’s revamped and very hungry. Matt wants another win under his belt and wants to again establish that aura of dominance that he had for so long. I think he’ll come out on top.

Rich Wyatt:  Do you have any parting thoughts and/or anyone you would like to thank?