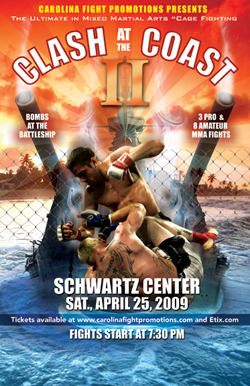 Carolina Fight Promotions will be offering their first MMA event of 2009 on Saturday, April 25th, 2009, in Wilmington, NC.  The event will take place at the Schwartz Center on the campus of Cape Fear Community College.  There will be 3 pro bouts(including title fight), along with 8 amateur bouts with a 145lb title fight between Cesar Llamas and Robert Owens.  You can get your tickets here.  The rest of the fight card is after the jump.