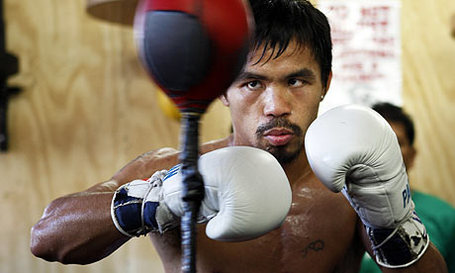 I posted yesterday that the Mayweather/Pacquiao fight was in danger of not taking place because Mayweather wanted Pacquiao to take Olympic style blood tests which boxers normally don't have to do. However, now it appears that there has been some compromise that will allow the fight to take place.  Pacquiao's promoter Bob Arum said the following:

Arum's first reaction to the ultimatum was: "As far as I'm concerned, the fight is off." Within hours he had offered a compromise deal, one that Mayweather would be foolish to reject unless he wants to scupper a fight that could generate as much as $200m. "Manny will submit to as many random urine tests as requested," said Arum, who wants the testers used in the NFL, NBA and Major League Baseball. "Regarding the blood tests, he will subject himself to three tests, one given in January during the week the fight is formally announced, one 30 days from the fight, no later than 13 February, and the final one immediately following the fight, in Manny's locker room."

Now let's see if Mayweather will come up with another monkey wrench to try and keep this fight from happening.