Promoted to frontpage from fanposts by Kelvin Hunt 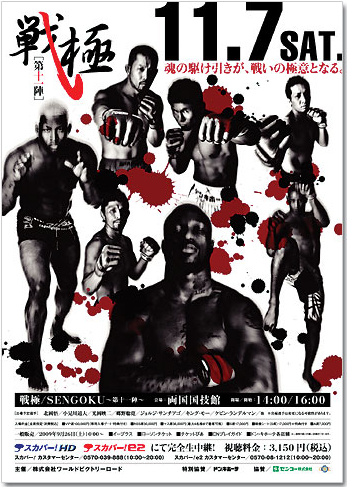 Sengoku 11 is set to take place Saturday in Tokyo, Japan. Sengoku 11 will be the last event before World Victory Road unleashes the new western like banner called, "Sengoku Raiden Championship". Clearly Sengoku knows that Japanese MMA has an inferior product compared to western MMA. So "Sengoku Raiden Championship" is set to not only bring in a new banner but also to bring in new fighters, new rules, and new marketing strategies. Hopefully this turn around will make Sengoku more prosperous, along with Japanese MMA. Sengoku 11 will air live on HD Net Saterday morning at 2a.m. ET. To me I am more excited about this card up and down rather than Strikeforce's card. In my previous previews my record has been a mediocre 11-6, I'm looking to do much better this time around.

Hatsu Hioki and Michihiro Omigawa touch gloves for a title shot against Masanori Kanehara. Hioki beat Kanehara in the semi-final match of the featherweight grand prix but was forced to withdraw due to injury. Omigawa became the tournament's dark horse when he beat a young prospect LC Davis, a very game Nam Phan who is finally fighting at his natural weight, along with Omigawa and very controversialy beat Marlon Sandro. Hioki is known for his top control and ground-and-pound, that is why he has been dubed the "Iron Broomstick". Clearly Omigawa does not want to take this fight to the floor, and with his superior strength and Judo, in the clinch Hoki is going to have a hard time getting Omigawa there. The most important and interesting variable in this fight is who controls the pace? Throughout the tournament both fighters controlled where the fight took place. Even in the Omigawa vs Sandro fight, Omigawa controled the pace but Sandro stifled his offence.  If both fighters are on their feet for most of the time, Hioki will be at a severe disadvantage. I like Hioki in the fight though, I think Omigawa slips up and takes down Hioki and Hioki locks on a submission for the win. Hioki r2 Submission (Triangle Choke for bonus points)

Jorge Santiago returns to Japan after wining the Senguko title over Kazuo Misaki in January. Santiago was supposed to fight Vitor Belfort for T-shirt guy, but we all know how that went. Now he takes on Mamed Khalidov, a fighter out of Poland who has not been beaten in over four years. It is a non-title fight which is weaksuace, but at least we are seeing the fight. Khalidov is a really good wrestler that likes to take people down and bash their skulls in. Khalidov also has power in his hands, unfortunately he throws his arms around like a helicopter. Even though most of Santiago's wins have come by submission, he has a very versatile striking game. Santiago's kryptonite? His glass chin. If Khlidov lands one of his heliocopter punches on Santiago's chin, goodnight Santiago. I like Santiago in this one though, This fight will end up in the Clinch position and I envision Santiago landing knees, Khalidov will not like that so he will take Santiago down and eventually Santiago will submit him. Santiago r1 Submission

Kitaoka is on a mission to leg lock every opponent that steps in the ring with him, his former victims are Carlos Condit, Eiji Mitsuoka and Takanori Gomi. Kitaoka's first challenge after his loss to Mizuto Hirota in August is American Top Team prospect, Jorge Masvidal. Kitaoka is a cut-throat grappler with a one-dimetional gameplan. Although the gameplan is simple, Kitaoka stamina has been but into question and it has been difficult for him to continue his gameplan for all three rounds. Masvidal strategy is also simple, stand and throw. If "Gamebred" wants to taste victory, he will have to avoid being forced to the mat by Kitaoka. Masvidal exciting style galvanizes the masses, but I see Kitaoka getting past "Gamebred" in this one. Kitaoka r1 Submission (Achilles Lock for Bouns points)

Yokota is coming an impressive first round knockout over Ryan Schultz just six weeks ago! Yokota's name is being spread throughout Japan after his win. If Yokota continues to improve, he might become a star in Japan. Mitsuoka used his superior striking to pick apart Rodrigo Damm and eventually sunk in the Rear Naked Choke. This fight has got fireworks written all over it! But lets be honest so does every fight on this card, but both their styles make me think this is going to be a stand-up war, you do not want to miss. How ever wins this match-up is set to face Mizuto Hirota for a title shot on NYE. Yokota has faster hands but Yokota's footwork, along with leaving his hands down is not a good idea against Mitsuoka. Mitsuoka is the better wrestler but can he take the strong willed Yokota down? I doubt it, Yokota has beaten Hirota before and i would really like to see the re-match. Styles make fights and I like Mitsuoka's accurate striking style rather than Yokota's speed. Mitsuoka DEC

Kevin Randleman contiunes to fight after his lackluster preformace against Mike Whitehead in Strikeforce. The "Monster" looks in great shape but his gas tank isn't there, and neither are his skills. MMA has evolved past Kevin Randleman and I would really enjoy not seeing him fight anymore. The only reason I say this is because I like the guy. Stanislav Nedkov is a good heavyweight prospect coming out of Bulgaria. Nedkov made his Sengoku debut at Sengoku 8 where he and veteran Travis Wiuff exchanged low blows. He is a really good wrestler, I see Nedkov and Randleman clinching against the ropes and eventually Nedkov will take him down and punish Randleman with some ground n' pound. Nedkov rd2 TKO

After being KTFO by Dan Hornbuckle Gono comes back to fight young submision specialist Yoon Young Kim. Kim has fought in the Japanese promotion DEEP several times, this is a much bigger stage and I don't see him being able to get Gono to the ground in this fight. With the element of being the better striker in this fight, I see Gono keeping it on his feet and peppering Kim with punches from different angles. I see Gono playing it safe in this one. I am excited about his walk-out preformace though, I wonder what he will do? Gono DEC

Sengoku featherweight tournament semi-finalist, Marlon Sandro was very aggravated after getting robbed by the judges. Sandro is an all-around Ace. Standing or on the ground he has an advantage over most people. In Sandro's way is no tomato can, Yuji Hoshino is Cage Force's featherweight champion. Hoshino last loss was in 2004, Hoshino is a strong wrestler with really good top control. If the fight hits the mat, Sandro is going to have a hard time reversing or popping up from Hoshino's takedowns. That is why Sandro must use movement to not let Hoshino set up his takedown. If Sandro does this he has a clear advantage in the striking department. I know this fight will hit the floor but I am counting on Sandro not to get taken down over and over again. Sandro DEC (Split DEC for Bouns points)

My breakdown of this fight will last longer than the actual fight. Remember that. Dave "Pee-Wee" Herman has never seen a judge’s score card in his career, touches gloves with havey-handed "Big" Jim York. Herman recently got a quick TKO victory over Don Frye at Shark Fights 6. Now dedicated to training full-time (hopefully), Herman has taken MMA seriously and looks to reaffirm himself as another Heaveyweight prospect. York has heavy hands and that is about it, if he catches Herman he will obtain another knockout victory. I don't think that will happen, what I would like to see out of Herman is him using ropes to clinch up with York and putting York to the mat. Maybe displaying some ground n' pound or show some submission chops. But sadly I know that will not occur, I see "Pee-Wee" getting a knockout. Herman rd1 KO

Can you believe this is going to be the first fight on the card?! I LOVE both of these guys styles, this is going to be a great fight I can not wait. Ronnie Mann a veteran of the British MMA secne, returns to Sengoku after his lost to Hatsu Hioki. Mann's background is boxing and wrestling and at the age of twentey-three there is so much room for improvement. Can we see Mann setting the standard of striking in MMA? That is the kind of upside this kid has. This will be Shigeki Osawa first fight on a main card. Osawa is a fantastic former wrestler, he won the gold medal in the World Collegiate Freestyle Wrestling tournament in Greece. Osawa has great takedowns but little else. I see Osawa exposing Mann's decent takedown defence, getting takedown after takedown to ring up a unanimous victory. But can he do this against such a high-level opponent? Shigeki Osawa DEC

Thank you all for reading and have fun watching this weeks fights!