Steve Cofield has written an article that has brought to the fore in my mind issues highlighted by the current season 10 of TUF. For some time now I have had serious reservations about just exactly what the aim of the UFC is, and the contents of the product they are pedalling. As the leading exponent of MMA i believe there are certain obligations that they are privy too, like it or not. Here's an excerpt from the article to get the ball rolling

The mix of two coaches who hate each other, Kimbo Slice, veteran Roy Nelson and a bunch of heavyweight prospects would be explosive. Much of that has been delivered but the show has encountered one huge problem along the way - did any of these fighters come ready to fight and in tip-top shape?

By the looks of it, either most of the group doesn't train year-round or they were told about the assignment a week before the show.

How much damage does a fight like Matt Mitrione versus Scott Junk do with a casual fan who's giving the sport a try for the first time? They beat the snot out of each other and took massive shots, but they were exhausted three minutes into the fight. Maybe that's why the Kimbo fight was on Episode three, this way Spike/UFC could avoid a massive audience of new fans seeing the embarrassing lack of conditioning on display.

1. Where does the UFC's obligation in picking coaches start/end?

Yes. I was super stoked to see Rampage and Rashad get up close and personal, i quite enjoy the smack talk and find it endlessly amusing. That's missing the point though if that's the sole reason for selling us as the fan's these two "coaches" on a reality tv show whose whole premise is the coaching of select "talented" individuals/prospects. Rampage may decree

Cool. Why is he being selected to coach guys so? He says that is the reasoning behind bringing along his additional coaching staff, Tikki Ghosn et al. BUT when compared to a hand's on Rashad Evans who is teemed up with Phil Nurse, Greg Jackson and guest appearances from Marquardt and Jardine there is no one on God's green earth is going to convince me that these two teams of 8 fighters are being coached on a some kind of level playing field. It's ludicrously disproportionate and the blame for this lies soley with the UFC who instigated it. Rampage or his coaches don't even tend to their fighters after the fights end and Dana doesn't step in? Hell no! I'm not even going to go any further.

2. What onus does the UFC have in selecting fighters for the series?

We're at heart trying to engage talented individuals with the opportunity of a lifetime, a chance to make it on to the world's biggest MMA stage. A chance to roll and throw down with the big boys. And Scott Junk v Matt Mitrione is the an eigth of the pick of the crop? 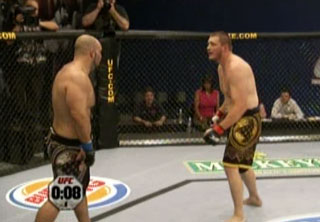 Dana i shit you not, you are having a [expletive] laugh. That was the most shameful fight I have ever been fed on TUF, run a close 2nd by Kimbo v Big Country. You're telling me that out of a U.S population of 307,817,178M these were two of the best HW you could find? The only thing these two boys could finish was there dinner, they could hardly finish a 5min round, let alone two of them. You then have the audacity to laud the fight?! you have done untold work for the sport, but, Get Out of Here!

This is before we even start to think about the impact the Browning brothers have had. This is one fan saying, No.