Share All sharing options for: Breaking Down BJ Penn vs. GSP II 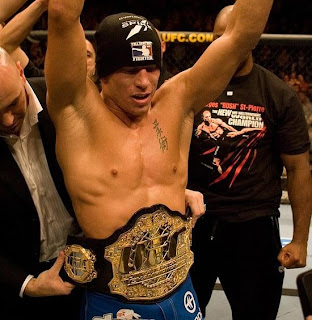 I think the MMA world has discussed to death the rarity and importance of this fight, so here at MMA4Real I'm going to get right down to the meat of this piece. There's no question that BJ Penn is a formidable opponent. However, I think a lot of factors will contribute to the outcome of this fight, more so than just who has the better mind/skill set on that night. I think BJ Penn comes into this fight with way more question marks than GSP. Let's take a look at three contributing factors:

BJ Penn hasn't been in the cage since defeating Sean Sherk at UFC 84 last May. By the time UFC 94 rolls around that will be a 8 month layoff from competition. Rampage Jackson experienced a similar layoff while taping TUF 7, and admitted that he allowed himself to get out of shape during that time frame. I'm not saying BJ Penn allowed that to happen, but it's human nature to not train as hard when you don't really have anything to train for. Whereas GSP fought Jon Fitch in August and pretty much knew he would be facing BJ Penn after he won that fight. Being out of competition for that length of time can and usually does have a negative effect on a fighter.

Will the move up in weight affect BJ's performance? Penn has been fighting at 155 for his past three fights, and will be moving up a weight class to face GSP.. Sure he did successfully in what will be exactly 5 years ago against Matt Hughes, but he'll be facing a totally different animal in GSP. I think the time off from fighting coupled with the move up in weight will affect Penn negatively as the fight goes on.

Penn has made no secret of his desire to knock GSP out. He enjoyed success while standing with GSP at UFC 58, but that was almost three years ago and GSP has that experience to draw back on. BJ Penn is a wizard on the ground, but if the fight goes there(and it will) I expect GSP to have top position. Where Penn generally uses his BJJ skills to sweep or get back to his feet. The only place where GSP will be in real danger of being submitted is if he has to give up his back at some point. I don't think Penn will be able to take GSP down, nor do I expect him to try to. Which pretty much makes him a one dimensional fighter.

Overall, I think GSP has the advantage in that he will be able to dictate where the fight takes place. If he wants to keep the fight standing he'll be able to, and if he wants to take Penn down he'll be able to. Also, while both fighters have improved since their last encounter I think GSP has improved a great deal more. He's bigger, stronger, and enjoys training with some of the best fighters in the world. He has also expanded his training regimen, going to Brazil to train BJJ at Gracie Barra and Nova Uniao since his last encounter with Penn. I also think he's faced and beat much tougher opposition when compared to who Penn has beaten in his last three fights. Jens Pulver, Joe Stevenson, and Sean Sherk are all very good fighters in their own right but they don't possess the same qualities that GSP does.

Penn has a very good chin, and I don't think GSP is capable of submitting him. I think GSP's game plan will be to mix it up with strikes and take downs as he usually does. While his size and strength, along with the long layoff will begin to wear on Penn as the fight goes on. BJ Penn will probably start the first round like he's been shot out of a cannon, which will ultimately hurt him in the later rounds(if GSP survives the initial barrage). So with that said, I'm picking GSP via unanimous decision.

What's your take on the fight, and who do you have winning?