Share All sharing options for: NC MMA-Fight To The Finish IV Quick Results 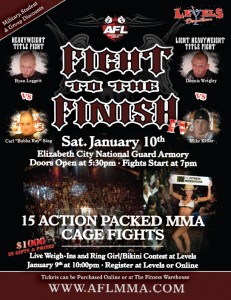 The AFL held their 4th MMA installment this past weekend in Elizabeth City, North Carolina. It was an exciting night of fights with only one fight going to decision. The fight results are as follows:

Please continue to come out and support the North Carolina MMA scene. The next MMA event in North Carolina will be the Circle Of Fury event held this weekend in Winston Salem, NC.