NC MMA-UFC "Fight For The Troops" Analysis And Predictions

Share All sharing options for: NC MMA-UFC "Fight For The Troops" Analysis And Predictions 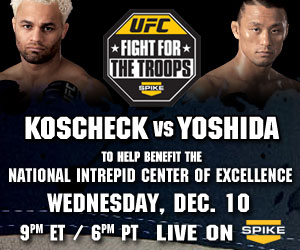 On tomorrow the UFC will literally be 40 minutes away from my house, and I will not be able to attend the event because it's for military personel only. I guess I should have caved in to all those military recruiters calling me when I was in high school huh? Well, we should have a good night of fights as it's always good when it's FREE. I'm pretty excited about this event given that it's a 3 hour show which means we are guranteed to see at least 5 fights. Let's get right to the fight analysis and predictions:

Jim Miller vs. Matt Wiman-Jim Miller is taking the fight on roughly two weeks notice as he is filling in for an injured Frankie Edgar. Ironically Edgar is the only person that Miller has lost to. Miller is no chump as he was a veteran of the now defunct IFL, and won his first UFC fight back at UFC 89. Actually, the majority of Miller's wins have come via submission usually of the choke variety. He'll want to get the fight to the ground to work his submission game. Wiman is a well rounded fighter who doesn't mind striking, and that's what he'll want to spend the majority of this fight doing. I think the short notice could affect Miller's cardio and him gassing is a possibility if he's unsuccessful at taking Wiman down. Wiman is on a 4 fight winning streak against somewhat decent competition. I'd like to see this fight when both guys have had proper training camps. I'm going to go with Wiman via TKO in round 3 simply because Miller is taking this fight on such short notice. Props to him for that.
Tim Credeurvs. Nate Loughran-Both guys are primarily submission specialists with Loughran absolutely loving to finish his opponents with the triangle choke. Loughran's striking game is pretty limited from what I've seen, and that could cost him in this fight. Credeur showed improved striking since being on TUF, should aim to exploit Loughran's limited skill set. However, he could just let his ego get the best of him and try to prove that he's better than Loughran on the ground. I'm go with Credeur via 2nd round TKO as he'll probably catch Loughran with punches or a knee as Loughran shoots for a take down.
Steve Cantwellvs. Razak Al-Hassan-Cantwell is was the champ of the now defunct LHW division of the WEC. He avenged his only loss to Brian Stann by KOing Stann at WEC 35. Al-Hassan is making his UFC debut after fighting primarily on regional shows. I've never seen Al-Hassan in action, but the majority of his wins have come via submission. Cantwell is a striker with some ground game as well, so I'm go with Cantwell via TKO round 1.
Mike Swickvs. Jonathan Goulet-Goulet is the prime example of journeyman fighter in my opinion. He's a good fighter, but every time he faces upper tier competition he falters. Although Swick hasn't exactly been fighting like an upper tier fighter since his move to the welterweight division, I expect him to do so in this fight. He should be comfortable with the cut to 170 now, and I expect him to let his hands fly in this one as he'll finish Goulet in the 1st via KO. Gideon Ray style.
Josh Koscheckvs. Yoshiyuki Yoshida-This is THE fight that I have been anticipating since it was announced way back when. I was supposed to get to see Yoshida fight live against Karo at UFC 88, but Karo wanted to wait until the last minute to squash that...ol bastid. LOL...anyways, Yoshida is no joke and it's a shame that more people don't know about him. He'll pose a stiff test for Kosheck with his judo background and strong top game. Yoshida finishes his opponents, in fact only one of his wins has gone to decision. Koscheck would be wise to NOT over commit on those wild haymakers he likes to throw, as it'll allow Yoshida to close the distance. Koscheck should use his explosiveness to take Yoshida down and punish him ala the Chris Lytle fight. He doesn't want to thrown on his neck with a Judo throw with Yoshida on top that's for sure. Koscheck doesn't want to lose two fights in a row either, so I expect him to fight a pretty 'safe' fight and take the decision win.

Well, that's all I have so be sure you get your picks in the comments thread. This show and the TUF finale can be your practice runs as MMA4Real will be doing a contest for UFC 92 in which the winner will get a prize! Also, if you haven't been able to donate to the Intrepid Fallen Heroes Fund you can do so here.