Why Creating A Super Heavyweight Division Is Retarded

Share All sharing options for: Why Creating A Super Heavyweight Division Is Retarded 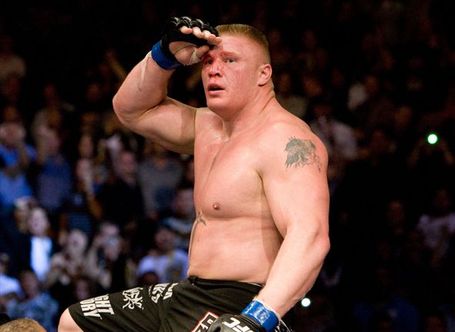 In wake of Randy Couture getting smashed by Brock Lesnar, I've read numerous pieces and interviews with people saying MMA should have a Super Heavyweight division. Basically using the weight discrepancy between Couture and Lesnar as some of their basis. Look, there is absolutely nothing wrong with the weight classes that are currently being used under the unified rules implemented by the UFC. Fighters in every weight class usually cut weight to fight at whatever weight it is that they fight at. Most fighters usually cut between 10-20 pounds to make weight for their fights. I realize that the heavyweight division has a 60 pound range in which a fighter can fight in the division. That's why it's the HEAVYweight division. For the people using the Couture vs. Lesnar fight as reasoning for their argument, check this out:


The fact of the matter is, most fighters have weight cutting down to a science. Like I mentioned earlier, most fighters cut between 10-20 pounds to make weight for their fights. Fighters weighing in at 220 need to fight at 205 if the weight discrepancy is too much for them. Randy Couture hasn't complained about Lesnar's size not once since being defeated, so I don't understand why all these fanboys go and try to make excuses for him. Can you imagine what having a Super Heavyweight division would look like? Those would be the most boring fights EVER. Here's a description of how a Super Heavyweight round would go:

Both fighters come out and touch gloves and begin to circle one another. They exchange punches a couple of times, tie one another up in the clinch with fighter A pushing fighter B into the cage. After 3 minutes both fighters are gassed, with fighter A gettinga takedown. The rest of the round consists of fighter A laying in fighter B's guard not trying to pass it while throwing girlie punches. The bell rings and you do it all over again, praying that somebody lands a tiger uppercut ala Junior dos Santos at UFC 90.

Where could you to find 10-15 guys in which you could form a Super Heavyweight division?