NC MMA-Fight To The Finish 3

Share All sharing options for: NC MMA-Fight To The Finish 3 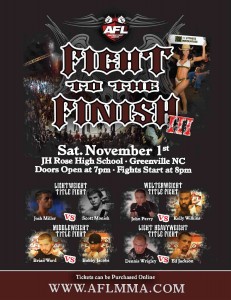 The Amateur Fight League(AFL) is a MMA organization that's based in the Northeastern part of NC. In North Carolina a MMA fighter must have 5 amateur fights before he can become a pro. The AFL's goal is basically to recruit and cultivate fighters to give them the opportunity to fight and become pro's. The AFL is also currently producing a highlight show that airs on WSKY-TV 4 here in NC. They will be presenting their third event on November 1st, in Greenville, NC at JH Rose High School with the doors opening at 7pmEST. The fight card is as follows: