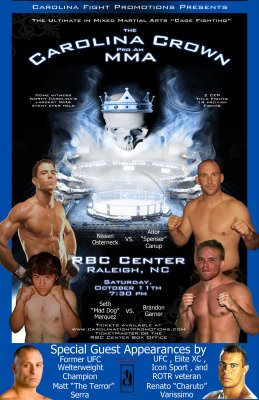 The main event consists of Brandon Garner vs. Seth "Mad Dog" Marquez at 135lbs for the CFP Title. Garner is a NC native and a cast member of TUF 8. However, he was eliminated on the first episode because of a 'No Contest' in which he hit his opponent with an illegal knee. Another CFP title will also be on the line with Nissen Osterneck vs. Aitor Canup at 185lbs. The remainder of the card rounds out like this:

Doors will open at 6:30pm with the show beginning at 7:30pm at the RBC Center in Raleigh, North Carolina, home of the NHL’s Carolina Hurricanes. Tickets are now available via TicketMaster and the RBC Box Office. This event will also be featuring special musical guest Takedown. Also making special apperances will be Former UFC WW champion Matt "The Terror" Serra, and UFC /EliteXC veteran Renato "Charuto" Verissimo.