Frank Mir Got It Wrong On Kimbo

Share All sharing options for: Frank Mir Got It Wrong On Kimbo 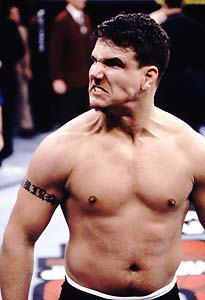 In a recent Interview Frank Mir spoke on Kimbo Slice:

I mean let’s face it, the public’s perception of MMA is not exactly fantastic. Every time guys like Tank Abbot or Krazy Horse (Charles Bennett) fought or even now with Kimbo Slice; every time Kimbo fights it sets the sport back. Guys like that just reinforce the idea in the public’s eye that we are all blood thirsty barbarians who just want to pummel each other and that there is no skill required. Guys like them do the sport a disservice.


Usually Mir is spot on whenever he decides to convey a point, but I can't agree with him here. Well I can in regards to Tank and Krazyhorse. However, in regards to Kimbo Slice I think he's got it wrong. Sure Kimbo has ventured into the MMA world after having bare knuckle backyard fights and being a bodyguard for prostitutes. However, since transitioning into MMA full time, Kimbo has pretty much been a model citizen. In that he hasn't been arrested or anything of that nature, and has given a great deal of respect to MMA fighters that have been doing it for a long time. In fact, if you listen to any of his interviews...Kimbo is actually pretty articulate.

I don't know if he was referring to the way Kimbo's camp picks and chooses his opponents or what, but I can't agree with him that everytime Kimbo fights...it sets the sport back. Once Kimbo fights better opponents I think it will validate MMA even more as a real sport. Maybe he is envious of Kimbo's sudden popularity within the MMA world? I don't know, but in regards to being a blood thirsty barbarian, Kimbo's style is the same as UFC legend Chuck Liddell...keep the fight standing and try to take your head off.

If the casual fan sees Kimbo fight and shares the same view as Mir...they are just stereotyping.