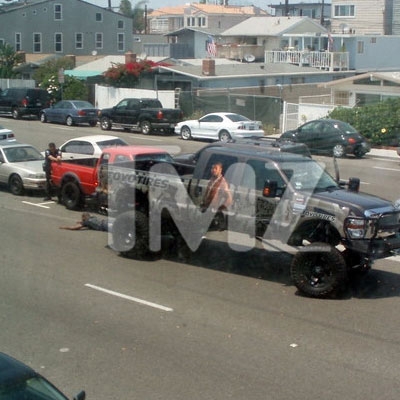 According to the latest reports...Dana White flew out to California to post bail for Rampage and he has been released. In a bizarre twist, there are reports that Rampage was 'medically unfit' to be booked. However, it has been documented that no illegal drugs/alchohol are believed to be involved in the matter. So it's just hard to pinpoint exactly what 'medically unfit' means. Luke Thomas at bloodyelbow states his opinion:

Second, there could be some sort of involvement of prescription drugs. This is a wild example, but the sleeping aid Ambien is known to cause somnambulism ("sleepwalking") in some patients. We have no idea if Rampage is on prescription drugs or whether they played a factor even if he is, but it's worth considering as a possibility.


That could very well be the case...however, my expertise in the matter is lacking so I'll wait until more information is given.
At this point in time, it's unlikely that Rampage will face any jail time as none of the charges(Hit and Run, Wreckless Driving) carry the felony tag(because nobody was injured). My best guess is he will probably have to pay a fine...and get probation/community service of some sort. So the UFC dodged a HUGE bullet here and should not sustain much damage in terms of negative press.

In terms of believing in things happening for a reason...no wonder Forrest Griffin got the nod on the razor close decision. If Rampage were still the champion and this sort of thing were to happen...it would have been MUCH worse in my opinion. It also would have created chaos within the UFC LHW division. What this does is pretty must justify Dana White giving Chuck Liddell the next title shot...provided he gets past Rashad Evans at UFC 88.

Stay tuned...as I'll be updating this story as I find out more information...also props to www.bloodyelbow.com (via TMZ) for the pic.